Blockbuster has announced that it’s adding games to its mail rental service. Customers now have access to over 3,000 titles for Xbox, Xbox 360, PS3, PS2 and Wii through the company’s mail subscriptions service.

Blockbuster says the move makes them the only entertainment company to offer rentals of games, movies, and TV shows for home delivery through a single subscription service.

"The addition of games for our BLOCKBUSTER By Mail customers – from families looking for entertainment experiences they can enjoy together, to serious gamers – is yet another convenient way to access entertainment content from Blockbuster," said Kevin Lewis, Senior Vice-President, Digital Entertainment. "This enhanced offering supports Blockbuster’s multichannel strategy and shows our commitment to being the leading provider of home entertainment content." 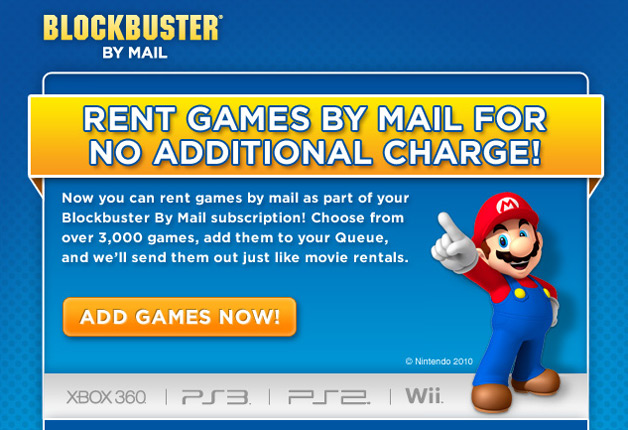 The move is smart and probably overdue. The competition in this space is heating up on both the movie side and the games side, and Blockbuster has yet to make a significant impact on the movie side with regards to the direction things seem to be going in (streaming). Netflix continues to bolster its streaming offerings and other online-only content sources offer streaming and downloadable movies. Redbox also recently expressed interest in moving towards streaming.

On the games side of things, besides the increasing interest in online, social games, Gamefly is generally thought of as the leader in the console game rental-by-mail space. A couple weeks ago, Gamerang launched its new game rental site with social and API features, hoping to carve out a bigger name for itself in the space.

Blockbuster’s movie/game combination service does give consumers something they can’t easily get anywhere else – games and movies from a single subscription. That will at least entice some gamers.

Meanwhile, Netflix continues focusing on increasing its streaming catalog A new deal with Epix was just announced today. This will give Netflix customers more streaming titles from Paramount, Lionsgate, and MGM.