About 10 days ago, Steve Ballmer indicated that he didn’t share Google’s views with regards to China; Ballmer said that Microsoft would continue operating in China regardless of recent hacks and a policy of censorship.  Today, Bill Gates more or less echoed those sentiments. 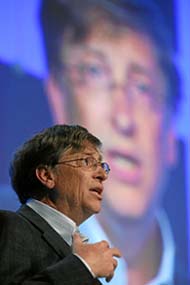 Some free speech advocates might have hoped Gates would feel otherwise; after all, now that he’s let Ballmer take the reigns at Microsoft, Gates seem to have focused his energies on doing good in the world, and Google’s claimed the moral high ground in this dispute.

Nonetheless, according to Reuters, Gates said on Good Morning America, "You’ve got to decide: Do you want to obey the laws of the countries you’re in, or not?  If not, you may not end up doing business there."

Gates also argued, "The Chinese efforts to censor the Internet have been very limited.  It’s easy to go around it, and so I think keeping the Internet thriving there is very important."

There’s further confirmation that Microsoft will stay the course in China, then.  Of course, we have yet to see what will become of Google’s own protest.