With the holidays coming up, people are going to be looking for discounts, and they’re going to be doing so online. One site, which many are likely to come across is BigDeal.com. This is an online auction site, which the company describes as "social gaming meets e-commerce" or "Zynga meets eBay". It’s claimed about 40,000 customers since launching in November of last year, and its traffic is growing steadily.

There has been a bit of controversy surrounding the site in the past. BigDeal CEO Nicolas Darveau-Garneau shared some thoughts on this controversy with WebProNews.

"There has been some confusion and misconception about how paid auction sites work and whether or not they provide a safe shopping environment for the consumer," Darveau-Garneau tells us. "We’d like consumers to know that we designed and engineered BigDeal.com from the ground up to provide them with just that. Shopping with us is fun, risk-free, and enables shoppers to win up to 95% off on brand new items – think PS3, iPod, jewelry, handbags, and more!"

Earlier this year, TechCrunch’s Michael Arrington, who had an advertising partnership with BigDeal, wrote after terminating the partnership, "BigDeal offers a service that is completely legal, and is backed by very well known venture capitalists. On the surface we shouldn’t have any issues with working with them. But the service is, in my opinion, at best misleading and at worst little more than a scam."

Judging from the comments on tha piece, Arrington is not alone in his assessment.

Darveau-Garneau says, "In a November 2009 New York Times article, journalist Brad Stone points out that BigDeal.com has ‘taken all the risk out of the bidded auction game.’ It’s a mantra we’ve had in place since our inception and we’re continuing to lead the way in this multi-million dollar industry by pioneering a number of unique features not found on other similar sites. Some of these include our ‘Loyalty Store’ concept, new social integration features, and specific shopping categories that enhance the shopper’s experience."

"The way to think about BigDeal.com is this:  play a fun game to win 75%-95% off an item. If you don’t win, buy it at about the same price you would have paid anyway. We have over 50,000 paying members and have 40,000 auctions won so far, so I guess we must be doing something right!"

BigDeal’s members purchase the right to bid on items. Bids cost $0.75 each.  Members then compete against each other to win items. Each item begins at $0 with no reserve price, and each bid increases the price of the item by a few pennies and adds a few seconds to the countdown clock. The last one to bid wins the item at that price. The company tells us its average winner gets a 75% saving and over 50% of its winners get 90% or more off. 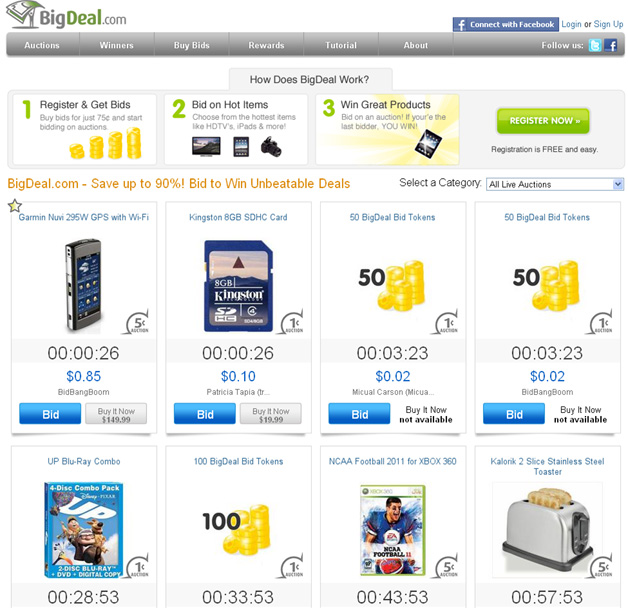 Members that don’t win can buy the item at its retail price. Users also receive loyalty dollars on BigDeal.com. For every $1 spent bidding on the site, they give users $1 in loyalty dollars, which can be used for large discounts in BigDeal’s loyalty store.

Auction winners are likely to get 75% or more off a brand new item, the company claims. Last week, BigDeal introduced a new version of its site, which now features new social integration and product categories.

Since TechCrunch’s article about the site, BigDeal’s uniques have done nothing but grow. As the holiday season approaches, I wouldn’t expect that to chanage in the near future.

Have you used BigDeal.com? Tell us what you think about it.

Brand Fans On Facebook More Likely To Make A Purchase