Reactions to Google’s announcement about a possible withdrawal from China have been mixed so far; there have been objections from individuals who think its absence will deprive the Chinese people of information, while others approve of what they consider a moral stand.  But Baidu’s investors probably aren’t too conflicted, as the company’s stock imitated a bottle rocket today.

Today, Baidu’s stock gained 52.99 points, which works out to 13.71 percent.  That’s the sort of improvement many investors would be happy to see take place over a full year, especially considering how the recession has lowered expectations.

Baidu’s stock didn’t soar in accordance with any sort of market trend, either.  The Nasdaq rose just 1.12 percent today, and the Dow gained an even less impressive 0.50 percent.  So this is just a matter of many people realizing that Baidu would perform better than ever in a Google-less China. 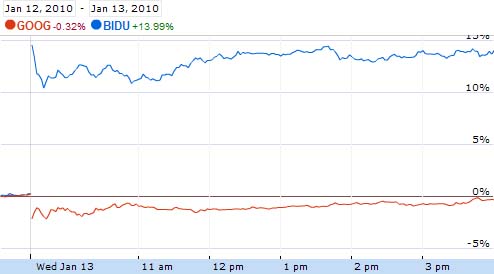 Google’s stock, meanwhile, was less fortunate, sinking 0.57 percent today.  Although we should note that multiple factors could have influenced both developments.  (One more side note: the numbers in the graph are off because it covers a slightly different timeframe.)

Anyway, it should be interesting to see how these stocks continue to fluctuate as the Google China drama plays out.  One way or another, it’s likely that a lot more money will change hands before the end.

> Some Interesting Points About The Google China Situation