AT&T and the NCAA have launched a new iPhone/iPod Touch app. With a big day of college football coming tomorrow, its as good a day as any for such an app.

The app is free and combines social functionality with real-time NCAA football news. Fans of Division 1 teams will be able to chat with one another (as well as fans of opposing teams, so that should cater to a fair amount of trash talk).

"The NCAA Football Fan Zone App Powered by AT&T gives college football fans an ‘always open’ venue to do what they do best – talk about college football," says AT&T. "To get started, users simply download the app and choose a team or teams they want to track. Users can chat with all other group members – making predictions, cheering and ranting during the game, uploading photos or partaking in a round of post-game analysis." 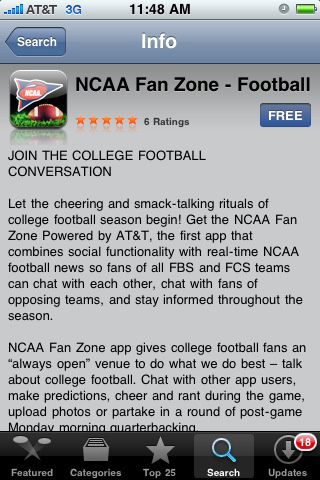 "To add a little fun to the conversation, groups for opposing teams are merged before, during and after each game allowing all posts made during that time to be visible to both teams," the company adds.  "To ensure smack talking remains family-friendly, groups are systematically monitored and users can report abuse at any time."

The app is available in Apple’s App Store.