Last week, we asked you whether or not social media sites should censor offensive content. The issue that spawned that debate was the possible removal of certain trending topics by the folks at Twitter. After a certain hashtag (#reasonstobeatyourgirlfriend) gained steam two weekends ago, a large group of users demanded that Twitter remove that topic from their trending list.

It’s unclear whether Twitter removed the topic or it simply fell off the list naturally (evidence suggests the latter), but the question remained: Should they censor that offensive content?

Your comments last week provided a pretty clear answer to the question: No. Although the distinction was made that social networks like Facebook and Twitter are private companies who aren’t compelled to operate under the same free speech allowances as the U.S. Government, a majority said that it would be wrong to remove the offensive content.

This week we ask a similar question, but with raised stakes. What about content that advocates violence? Let us know in the comments.

Let it be known, the following article will contain no religious opinions from yours truly – whether heavy-handed or carefully cloaked. At the heart of this, for me at least, is simply the issue of anonymity online and the tendency for people to say crazy things when staring at a keyboard and a monitor. Oh, and some of these posts are simply epic in their jaw-dropping hypocrisy.

Here’s how the story goes:

Blair Scott, Communications Director for American Atheists made an appearance recently on America Live with Megyn Kelly on the Fox News Channel.

The reason that he appeared was to discuss the recent lawsuit filed by the American Atheists group over the cross-shaped steel beams at the World Trade Center site know as the “World Trade Center Cross.” The cross would form part of an exhibit at the September 11th Memorial and Museum.

The lawsuit alleges that the cross-shaped steel beam display promotes Christianity over all other religions and it diminishes the civil rights or non-Christians since it is included on public property.

To them, it’s a matter of church and state separation. Either that or it’s about the singularity of the religious celebration. According to ABC News, the American Atheists said that they “have contacted the 9/11 Memorial and Museum requesting to display their own atheistic memorial next to the steel-shaped cross, possibly in the form of an atom or an American flag, to represent the ‘500 non-religious Americans’ who were “among the victims of the 9/11 attack.”

They say that their request was met with silence.

UPDATE: Fox News has issued a statement about the comments in question:

“We make every attempt to keep our Facebook page as safe as possible,” said Peter Drace, Fox News VP and creative director of promotion, “and we take immediate steps to remove all hateful and dangerous language.”

Although the content is no longer available as it has been removed, multiple sources managed to grab screencaps of the comments. Here are the ones culled by American Atheists themselves – 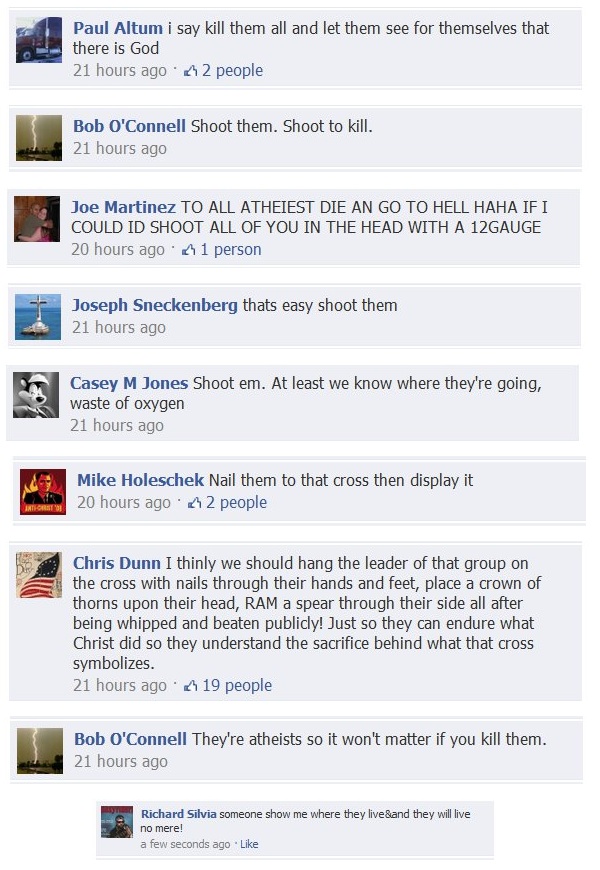 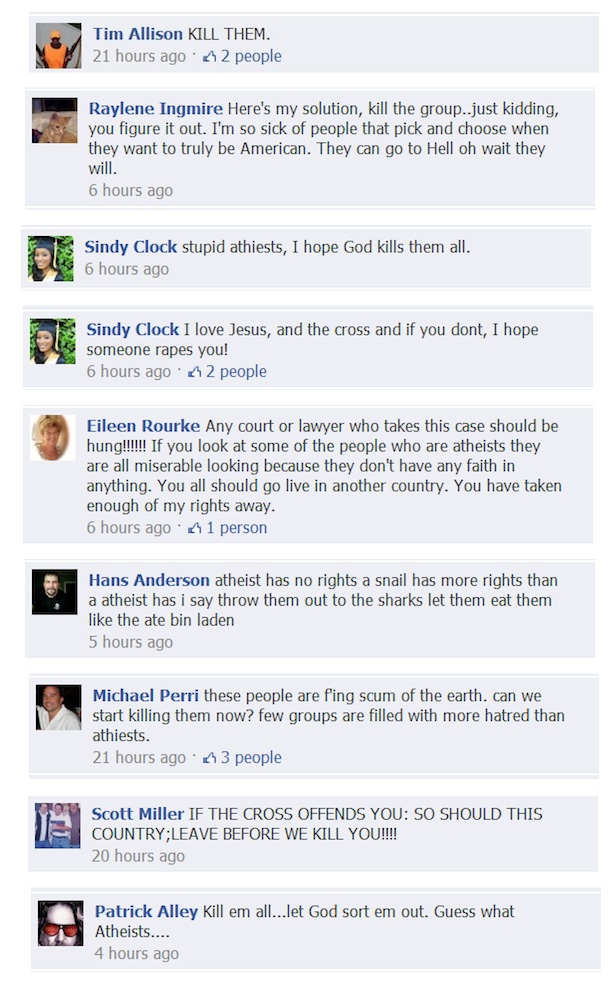 From the mouth of one gentleman, “few groups are filled with more hatred than atheists.” Just before that, “can we start killing them now.” Isn’t it ironic? Dontcha think?

Some bloggers who also screencapped many of the comments blurred out the names of the commenters. Others specifically brought attention to their names. Their argument is that the internet needs accountability. Basically, if you have the balls to say something, you should have the balls to answer for it. Nobody should protect people on the internet who post controversial content for public consumption.

Anonymity: Is it the landmark achievement of the internet or its central problem? Last year, a Facebook product design manager wrote an op-ed piece for the New York Times where she called for content providers to stop allowing anonymous commenting. She pushed the importance of accountability.

And just recently, (former) Facebook employee Randi Zuckerberg said that anonymity on the internet has to go. She said that “people behave a lot better when they have their real names down” and “people hide behind anonymity and they feel like they can say whatever they want behind closed doors.”

Well, the majority of the commenters above didn’t hide behind closed doors. They used their reals names to post their misguided comments. You can check out their Facebook pages – many of them aren’t set to fully private. Is the fact that people aren’t having to talk directly to people’s faces enough? Is that all the anonymity they need?

We talked yesterday about new research linking Facebook use to aggressive behavior. Is this what they were talking about? Is all of that anger and hatred a product of Facebook use in general? Or is Facebook simply a platform that can be used for everything, good and bad – and Facebook just enables some people with certain predispositions to bad behavior?

Motivations for the behavior aside, controversial content finds its way to social media sites. This is a fact. And once it gets out there for public consumption, decisions must be made regarding how to deal with it.

From the various reports from people who were screencapping these comments as the rolled in, the pace at which the truly extreme “death wishes” disappeared was pretty quick. It’s much more likely that the Fox News Admins were fighting to remove the content as opposed to Facebook stepping in. But the debate remains: if the comments above had been left alone, should Facebook have removed them?

Or do the inarguably vile comments deserve free speech protection within the realm of social media speech guidelines?

I know that few topics of conversation could be filled with more sensitive issues than vile threats to atheists over a Christian monument at 9/11. That’s hitting all the hot spots – religion, national tragedy, politics, etc. And it’s virtually impossible to separate those sentiments from a free speech debate. But let’s try to think about this as Christians, Atheists, Republicans, Democrats, Anarchists – whatever title your identity merits.

Does this violent speech have a place on Facebook? Even though it doesn’t advocate the death of any singular person, is it prone to incite violence?

Should it remain as a testament to free expression? Let us know what you think in the comments.