YouTube has a lot of influence on people’s daily lives. It is often touted as the world’s 2nd largest search engine, and is by far the top online video destination.

Ipsos released some new research, seeking to understand how consumers engage with media brands, with a specific focus on popular online video and TV brands. YouTube was found to be the most engaging online video brand, as Google is happy to point out.

However, YouTube is (unsurprisingly) scored much higher in the entertainment department than the credibility department: 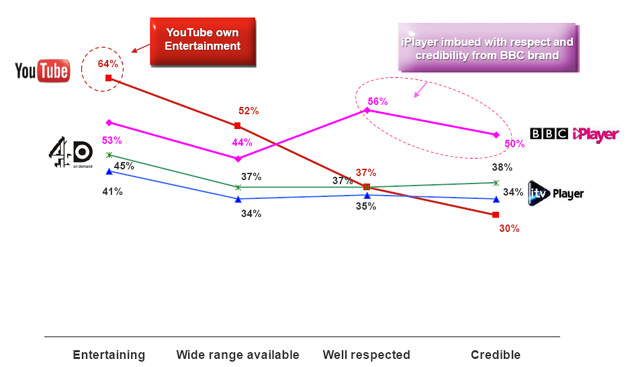 Interestingly enough another study was released this week, looking at credibility of content in different online environments. This research from the Online Publishers Association found that consumers are more likely to trust content on media sites than on portal channels and social media. There appear to be some parallels here.

YouTube has been doing plenty to raise its credibility as a destination for professional and important content. Three very recent examples come immediately to mind. This week, YouTube announced that it is a testing news feed feature, which aims to bring breaking news via YouTube into one stream. White House Press Secretary Robert Gibbs answered user-submitted questions on YouTube following a speech from President Obama, and YouTube partnered with the Guggenheim on an interesting contest. There are plenty more examples.

Still, it appears many users still consider YouTube just a place to find sill cat videos, and other entertaining, but not necessarily important content. A number of our Facebook fans who took the time to comment, said they wouldn’t use YouTube’s news feed as a news source.

Regardless of credibility status, more people are watching and sharing online video, and YouTube is the biggest contributor to this. The credible content is on there. It’s just a matter of finding it, and users acknowledging it.

How The Twilight Saga: Eclipse is Marketed Online