Are Small Private Social Networks the Next Layer?

As business people get in the habit of participating in online social networks and engaging in social behavior as part of their everyday routine, the next waves of online innovation won’t necessarily come in the form of a Facebook killer or Google launch, as they will in little adaptations of tools and apps that let us do more of what we’ve grown used to doing. 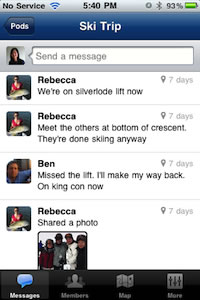 To me, a great case in point is the growing buzz around group texting apps. Group text apps such as GroupMe, Beluga and Disco allow users to form groups that can send and receive text messages in a sort of reply and read all manner. You can think of it like group chat or reply all emails, but on the go and on a mobile device. You can also launch group conference calls from the service. (Right now most are limited to US carriers as sorting out International texting is going to prove trickier.)

For our increasingly mobile world this application fills a couple interesting gaps. Texting with your friends lacks the obvious reply all function, so if you want to tell twelve people what you are doing you have to enter the list each time. Email can get this done, but it’s a little clunkier on the phone and requires folks on the list to sync up with their email. Anyone with text capability on a phone can now participate in the group. (I’m guessing that’s getting to near 100% these days.)

To some degree, Twitter was created with this kind of functionality in mind and I recall people using it like this when it caught fire at SXSW 2007, but then we got all these followers and actually reading a stream fully became impossible, not to mention public.

I think group text apps can add a layer to our increasing habit of social communication, but allow us to create small, private social networks that communicate through our mobile devices. The fact that Facebook recently purchased Beluga and Disco is a Google creation, should be signal enough that this is a growing communication option.

The obvious use, and one that first introduced me to group text apps, is a small tight knit group like a family. My four daughters are grown and spread around the country and through the use of a group text app we routinely strike up impromptu chats and send updates and everyday life kinds of photos that happen on the go and wouldn’t happen if we relied on Facebook.

A group that contained staff members would make it very easy to send alerts, quick updates and even throw out topics for debate while including all in an instant loop that could be captured for later reading. There are other tools that can make this happen as well, but there’s something very instantly participatory about SMS. Departments and far flung teams could create on the go alerts and discussions.

Now, some might bemoan the fact that their phone is now going to start buzzing away with insidious group chatter from the office clown that now has yet another way to show off pictures of his cat, but like all things, you’ll need to manage the tools and create process that works for this to be a viable new communication channel.

What about creating select groups of clients that agree to offer occasional opinions about new marketing initiatives. Or, allowing clients to opt in to your referral group and use the tool to educate them about your referral contest. Or, creating a small, private social network of strategic partners that could share information about potential opportunities and leads exclusively.

Because groups can be created and deleted almost on the fly, group text apps are becoming a huge hit at conferences and events as a way for people to get up to the minute updates on what’s happening now. I’m already seeing people splintering off social networks by location and creating on the fly groups when they travel to a city with friends.

Group text apps are easy to set up and allow the group creator or administrator and participants a great deal of flexibility in managing the group. There are opportunities to create public groups, but it’s the private function that offers the most promise. You can be certain that things like advertising and recommended brand led groups based on your interests are likely monetization options for these free tools, but for now, I think it’s a category worthy of consideration.

Shares some ways that you see using this technology in your business?