Gmail Motion, one of Google’s numerous April Fools gags, has captured the imagination of the web. Google says Gmail Motion uses your computer’s webcam and the company’s “patented spatial tracking technology” to detect your movements and translate them into meaningful characters and commands.

“We’ve been testing Gmail Motion with Googlers over the last few months and have been really excited about the feedback we’ve been hearing,” says McDonald. “We’ve also done some internal tests to measure productivity improvements and found an average 14% increase in email composition speed and 12% reduction in average time in inbox. With Gmail Motion, Googlers were able to get more done and get in and out of their inboxes more quickly.”

Google even goes so far as to say that you need the latest version of Google Chrome or Firefox 3.5+ and a built-in webcam to use Gmail Motion. It doesn’t even work with Internet Explorer apparently.

Google puts a lot of time and thought into its April Fools jokes. While some may just post a funny article or something, this company goes all out. They make product pages, opt-in mechanisms, statistical graphs, diagrams, videos, and all.

For Gmail Motion in particular, Google has even gone so far as to draft up a printable motion guide (pdf) for Gmail actions and common phrases. 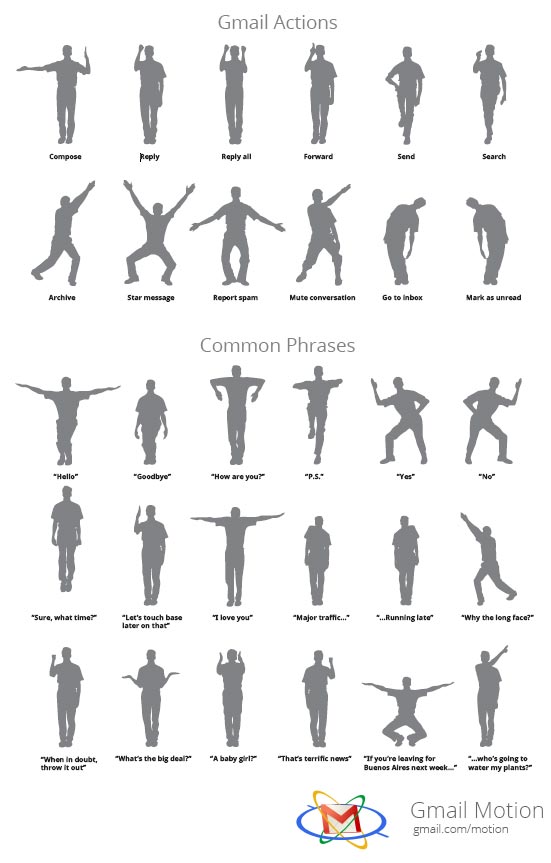 Google has always been a bit quirky, and some think the upcoming CEO change back to co-founder Larry Page will help preserve that.

The Bing Opportunity: Be the Anti-Google