According to the Next Web, Apple may be rejecting apps that require user registration first. The publication looks at an email a developer reportedly received from Apple saying:

Thank you for submitting Read It Later Free & Read It Later to the App Store. We’ve reviewed your apps, but cannot post these versions to the App Store because they require customers to register with personal information without providing account-based features. We have included additional details below to help explain the issue, and hope you’ll consider revising and resubmitting your application.

Applications cannot require user registration prior to allowing access to app features and content; such user registration must be optional and tied to account-based functionality. If you have any questions about this response, or would like to discuss it further, please feel free to reply to this email. We look forward to reviewing your revised apps. 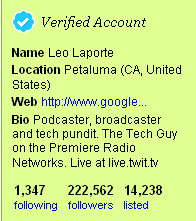 Leo Laporte has an interesting article about how nobody (including himself) noticed when his posts stopped appearing on Google Buzz and Twitter. "It makes me feel like everything I’ve posted over the past four years on Twitter, Jaiku, Friendfeed, Plurk, Pownce, and, yes, Google Buzz, has been an immense waste of time," he writes. "I was shouting into a vast echo chamber where no one could hear me because they were too busy shouting themselves. All this time I’ve been pumping content into the void like some chatterbox Onan. How humiliating. How demoralizing."

Considering the man has over 222,000 followers on Twitter, it’s pretty interesting.

Seth Godin announced that his next book Linchpin will be the last book he publishes the traditional way.

According to the New York Times, the Dish Network will begin offering a video portal called DishOnline.com this week, making it the latest distributor to provide online benefits to paying subscribers.

TechFlash reports that Amazon CEO Jeff Bezos has sold a million Amazon shares for about $138 million. This comes after other Amazon stock sales earlier this year. These sales now reportedly total about $640 million.