"We’re thrilled to report our best non-holiday quarter ever, with revenues up 49 percent and profits up 90 percent," said Steve Jobs, Apple’s CEO. "We’ve launched our revolutionary new iPad and users are loving it, and we have several more extraordinary products in the pipeline for this year."

The company sold 2.94 million Macs during the quarter, representing a 33% increase from the same quarter last year. In addition, it sold 131% more iPhones (8.75 million) and 10.89 million iPods. iPod sales actually declined from last year by 1%. 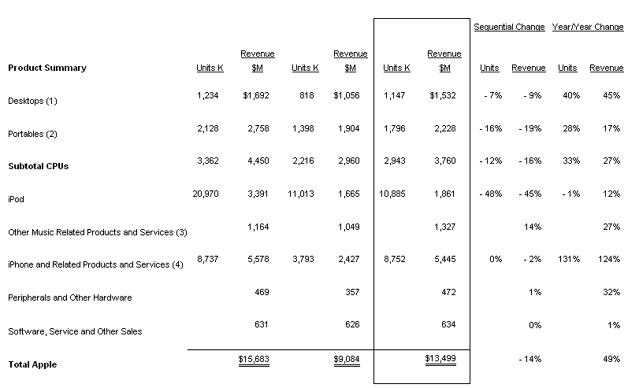 In other Apple-related news, the company misplaced a future version of the iPhone, which ended up in the hands of popular gadget blog Gizmodo. The company wrote a letter asking for its property back. Also a man in Denver had the flesh ripped from his finger, as thieves stole his iPad after he purchased it from an Apple Store. Somehow the injury reportedly occurred as he had the cords from his Apple bag wrapped around his fingers.