The Weinergate scandal continues to get more interesting day by day, as all sex scandals do. Piece by piece is unraveling, showing that the New York congressman maintained multiple sexual correspondences with young women across the country for a period of a few years.

Yesterday, Anthony Weiner held a press conference to admit to sending the now famous picture of his penis to a 21-year-old Seattle college student. When the photo first emerged, Weiner claimed that he has been hacked, and denied sending the photo. But yesterday he confirmed that he not only sent the photo in question, but that it is part of a pattern of inappropriate virtual relationships with at least six different women. 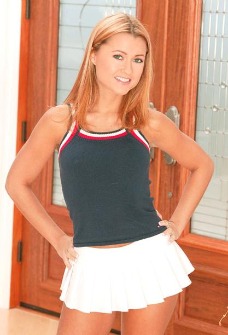 According to TMZ, she has been exchanging a large amount of sexual emails with congressman Weiner for a long period of time. Apparently, when the heat began to come down on Weiner for the tweeted penis picture, he went into PR crisis mode and asked Lee to lie about their relationship. He even offered to help her with a professional PR team. Some of the alleged emails from Weiner to Lee:

Do you need to talk to a professional PR type person to give u advice? I can have someone on my team call. [Yeah, my team is doing great. Ugh].

The key is to have a short, thought out statement that tackles the top line questions and then refer people back to it. Have a couple of iterations of: ‘This is silly. Like so many others, I follow Rep. Weiner on Twitter. I don’t know him and have never met him. He briefly followed me and sent me a dm saying thank you for the follow. That’s it.

And this is Weiner reportedly suggesting an actual statement for her to give:

I have nothing to do with the situation involving Rep Weiner. I follow his twitter feed. And for a brief time he followed me. Much has been made of the fact that I have posted about my admiration for Rep Weiner and his politics. All I can say about that is that I’m a fan of his. Rep. Weiner sent me one short direct message thanking me for following him. I have never met Rep. Weiner and he has never sent me anything innappopriate (sic) …

How’s it [the proposed statement] feel?

If Weiner offered to use his congressional PR team to hide the cyber-affair, he could be looking at a whole mess of ethics rules violations. Yesterday at the press conference he explained that although what he did was regrettable, he would not be resigning because he feels he has broken no laws.

It looks as though Ginger Lee was a huge fan of the congressman, and there is evidence of a relationship between the two on Twitter. Prudence Paine has some screencaps of the tweets, whose links are now broken. They reference in particular a direct message: 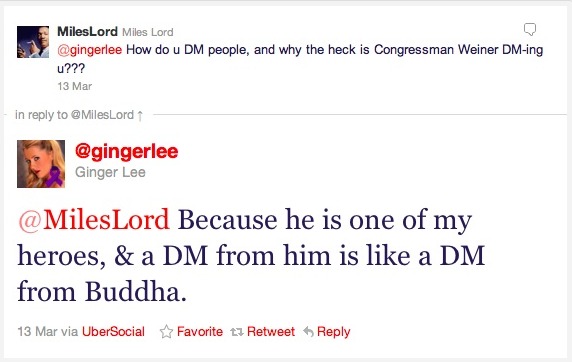 Multiple women are coming out claiming to be online mistresses of the congressman. A 26-year-old woman from Texas has offered photos, Facebook messages and emails allegedly from Weiner. Meagan Broussard claims that they exchanged messages, and that he “tried to get [her] to talk about [her]self sexually.”

A blackjack dealer from Vegas, Lisa Weiss, has also reported that she sexted and even had sexual phone interactions with Weiner.

While these relationships on their own are not against any law, if Weiner used government resources to attempt to conceal his behavior, then he will have a real problem – just ask John Edwards.

Twitter and iPhone: A Match Made In Social Media Heaven