The social media buzz machine behind the upcoming threequel The Dark Knight Rises seems to know what they are doing. Their campaign of unveiling little bits of information, piece by piece, and allowing the internet to explode with every new reveal is ramping up chatter for a film that probably doesn’t need much help generating chatter in the first place.

The newest item from the set is the first official photo of Anne Hathaway as Selina Kyle and/or Catwoman. That’s the thing – it’s unclear which ego this photo captures.

The photo was released unceremoniously on the official Dark Knight rises website. It appears via a hidden link on the middle of the home screen, across TDKR lettering.

The photo is called selina_kyle.jpg, so what we are looking at might be a particular version of the character that’s not exactly full-Catwoman. This could explain the lack of cat-like signifiers on the costume – no ears or anything.

A few other things jump out about the photo – First, the high-tech nature of the costume. The skin-tight black suit looks more “tactical” than anything. And those goggles are reminiscent of later adaptations of the character. And isn’t she on the batpod? Could that mean that Catwoman will be on Batman’s side in the new film? Or did she just steal it, being the master thief that she is.

For a full-res large version of the photo, click the image below – 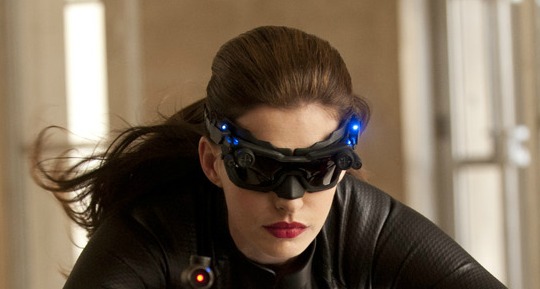 @sweet_yesterday
purple snorlaxLol at the fanboys complaining about catwoman costume. Just admit you wanted to see her in spandex or leather with her boobs hanging out smh

57 seconds ago via Echofon · powered by @socialditto

@Baresark_Artist
Dan Harris@Izmeister its truly appalling! I live in hope that she’s just a thief at this point and not in the guise of Catwoman yet…

4 minutes ago via Twitter for BlackBerry® · powered by @socialditto

@findingbeauty
CeeI know! Her hair was awful too! Blech. RT @yayahan Catwoman’s first reveal was entirely anticlimactic. I see the actress, not the character.

The Dark Knight Rises viral campaign began with a Twitter campaign to release the first picture of TDKR villain Bane. After that, fans took to launching their own viral campaign with surprisingly well made fan videos that many speculated to be legit Warner Bros products for quite some time.

The teaser trailer was then debuted during the final Harry Potter film.

In other superhero news, the first photo emerged yesterday of Henry Cavill as Superman in the upcoming Man of Steel. Twitter complained about his hair as well.

Web Apps to Get More Useful