Don’t be surprised if a lot of Android users spend more than a few extra minutes toying with their phones today.  A free version of Angry Birds, the game that’s occupied the top spot in Apple’s App Store for months, has finally been released for Google’s mobile operating system.

This launch counts as a real victory for Android, since it shows that the developers of Angry Birds value the platform even with all the success they’ve already experienced.  And it’s perhaps even more of a special moment due to the recent unpleasantness between said developers and Microsoft.

(If you’re not aware: a question over Microsoft’s use of an Angry Birds logo ended with developer Rovio strongly hinting that it didn’t want to release Angry Birds for Windows Phone 7).

As for how Android users are reacting, well, they seem to be more than a little pleased about the situation, considering that they managed to crash two sites. 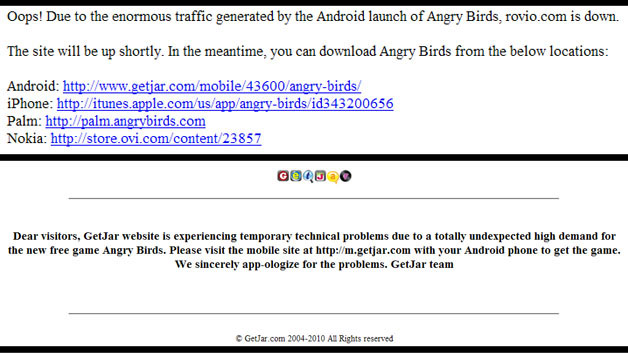 The one odd thing, as you may have noticed from those screenshots, is that Rovio chose to make the Android version of Angry Birds available through GetJar rather than the Android Market.

So perhaps developers are ready to recognize the influence of the Android operating system and its user base, but still aren’t pleased with the general disorganization of the Android Market.

UPDATE: Whether this was the plan all along or Rovio responded to its and GetJar’s downtime, Angry Birds is now available in the Android Market.