Five months ago, an organization called AndroLib indicated that 100,000 apps had been submitted to the Android Market.  Now, although AndroLib’s stats aren’t official, it looks like a whole lot of growth has taken place, as the latest graph shows the number has topped 200,000.

Have a look at the growth curve for yourself below.  It seems Android’s popularity with developers isn’t exactly tailing (or even leveling) off, which is good news for Google.  A platform with lots of apps should have a better ability to appeal to a wide range of people. 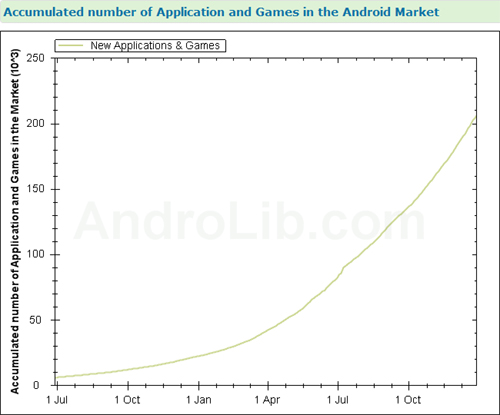 A word of caution: even assuming AndroLib’s numbers are correct, this doesn’t guarantee Android users have access to a full 200,000 applications.  When the organization announced that 100,000 apps had been submitted to the Android Market, it also made clear that there were only 83,000 active apps at the time.

Then, although we again congratulate Google, we should note that the addition of new apps to the Android Market might become meaningless at some point, since users can’t be expected to benefit from having 648 different weather-forecasting options.

Work Smart, Rather Than Hard