Android is still on a roll, according to new statistics from comScore, and if anything, the mobile operating system is picking up speed.  comScore puts Android’s February market share at an impressive 9.0 percent. 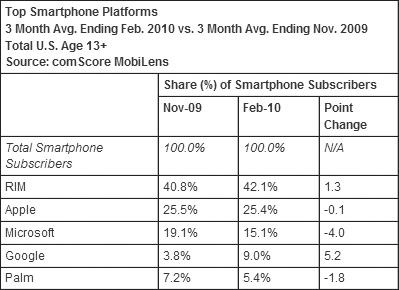 Meanwhile, most other smartphone platforms aren’t having much luck.  RIM’s in fact the only competitor that didn’t lose ground between November and February, and Microsoft doesn’t appear to be too many months away from being passed by Android.

If these patterns of losses and gains persist – and that’s an admittedly big "if" – Android could even catch up to Apple’s offering around January of next year.

Anyway, these numbers make Android’s biggest problems – fragmentation and a "flea market" approach to selling apps – look rather insignificant for the time being.  Google may not need to rush to address the issues, at least.

If Google Indexing Goes Real-Time, What Will it Mean for Ranking?