In many ways, the last traces of the 2009 holiday season have disappeared – you won’t find many decorations up, presents out, or leftovers refrigerated (we hope).  comScore’s just released a report concerning the mobile market, though, and the stats are well worth examining.

comScore’s report covers the changes that occurred between September and December of last year.  During that time, RIM stayed on top in terms of smartphone platforms, but it lost a little bit of ground.  Apple, meanwhile, gained a similar amount, and so the gap between the two was effectively narrowed by a couple of percentage points.

Sadly (for them), Microsoft and Palm also wound up losers.  Then – and this is arguably the most interesting part – Google made quite a leap. 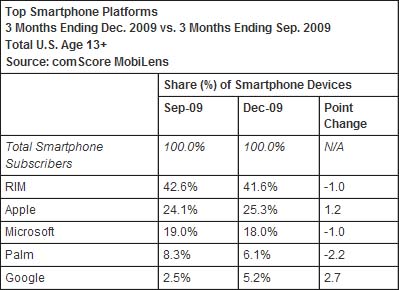 Looked at one way, Google’s improvement of 2.7 percentage points is the biggest change comScore recorded during the September-to-December timeframe.  Which is impressive enough.  Yet looked at another, Google more than doubled its market share over the course of three months.

That’s quite a growth rate for Android.  If it keeps up the pace for another three months, it’ll pass Palm by.  And from there, it could be just a year or so away from catching up with Microsoft.

These statistics will definitely bear watching in the months ahead, even if they’re a little slow to be published.

Is Google Launching a Competitor for Facebook/Twitter?