Canalys, a company that deals in market data, confirmed this morning that Android is on a roll in terms of shipments.  Android supposedly attained a U.S. market share of about 44 percent in the third quarter, up significantly from the period before. 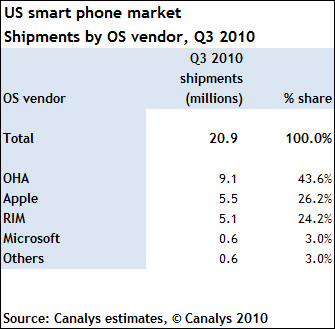 Android hit the 44 percent mark after managing just 34 percent in the second quarter, by the way.

Still, that doesn’t mean every organization other than Google had a bad quarter in the mobile space.  Canalys said in a statement, "In the world’s largest smart phone market, the US, Apple ousted RIM . . . seizing a 26% share as iPhone shipments continued unabated."

Also, according to Canalys, "[W]ith the launch of Windows Phone 7 devices, [Microsoft’s] outlook for the fourth quarter and beyond is significantly improved."

So we’ll see what happens.  The fourth quarter is almost sure to correspond with lots more smartphone shipments as consumers participate in the holiday shopping rush.