Millennial Media has released its monthly Mobile Mix report looking at the smartphone market for the month of December. For the first time, Android surpassed iOS as the largest smartphone OS on the Millennial network, with an 8% increase month-over-month and 46% impression share on the firm’s network in December. iOS currently has a 32% share.

For context, Millennial’s network is the largest mobile ad network in the U.S.

According to the firm, Android ad requests grew 141% from Q3 to Q4 and since January 2010, Android has grown 3130%. When breaking down the revenue generated by apps in Q4, Android had a 55% share as opposed to 39% for Apple. Android also had a 13% increase quarter-over-quarter.

Apple remained the top manufacturer on the Millennial network (as it has been for the last 15 months), and the iPhone and iPod touch made up two out of the top three of individual mobile devices. 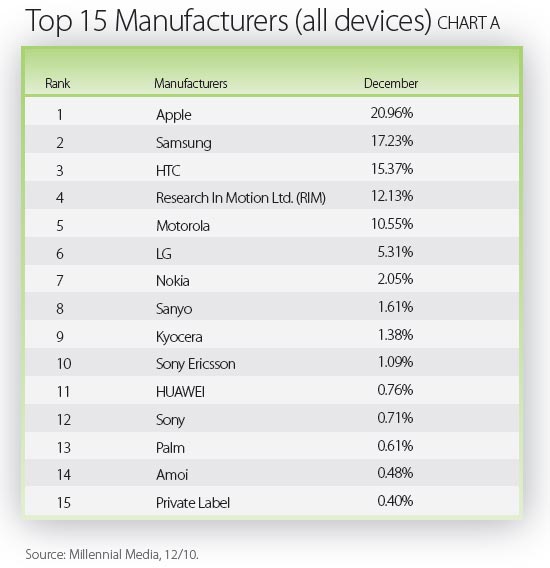 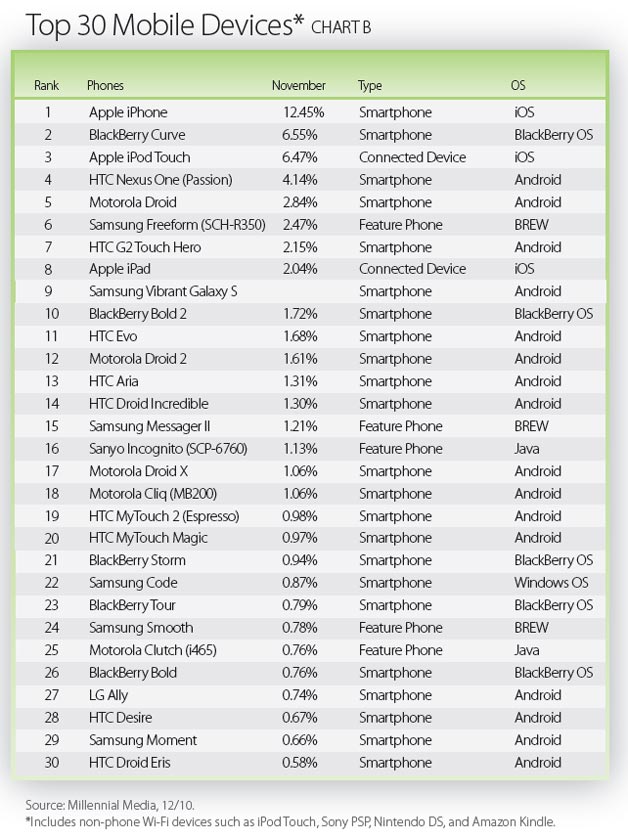 HTC came in at number 3 in the Top 15 Manufacturers with a 9% month-over-month increase. "There is a direct correlation with this increase and HTC having the highest number of devices (nine) in the Top 30 Mobile Device-Ranking including the debut of four new devices on the Millennial network: HTC Nexus One (Passion), HTC Evo, HTC Droid Incredible, and the HTC Desire," a spokesperson for Millennial Media points out.

As far as carriers, Verizon experienced a 2% increase month-over-month in December. "Verizon’s impression share is likely a result of the popularity of Droid devices and the carrier’s ability to offer 13 of the Top 30 Mobile Devices," the spokesperson said.

It will be interesting to see how much Verizon jumps for the February report, with the release of the iPhone for Verizon.

Samsung maintained the number two position in the Top 15 Manufacturers for the third consecutive month.