People who purchased smartphones in the past six months were more likely to buy an Android device than an Apple product by a ratio of about 1.5 to 1, according to a new report from Nielsen.  This led the data research firm to give Android the enviable title "leading OS among recent acquirers" this morning.

The graph below should make the basis for the title clear.  More and more consumers decided to give Android a try during the second half of 2010, while in terms of percentages, Apple’s iOS hasn’t made much progress in recent months and the BlackBerry OS is losing ground. 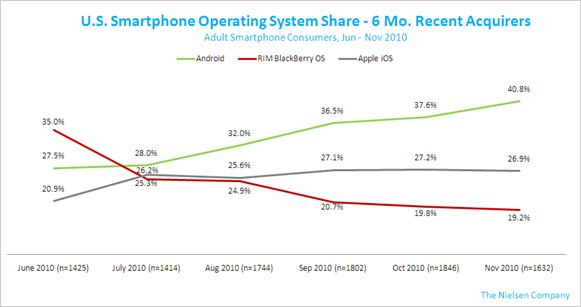 Of course, those trends don’t exist in a bubble, and so Android’s also doing well in terms of overall market share.  Nielsen put Android’s share at 25.8 percent, not too far behind iOS’s 28.6 percent.

Meanwhile, the BlackBerry OS might soon fall out of the race, as its share has slid to 26.1 percent.

Nielsen reported, however, "This much is clear . . . All three smartphone OS leaders – Apple iOS, RIM Blackberry and Android – are benefitting from strong demand for smartphones.  In November, 45 percent of recent acquirers chose a smartphone over a feature phone."

That figure’s sure to increase over time, too.