According to a report by mobile researchers research2guidance, the Android Marketplace will overtake Apple’s Appstore to become the biggest application store in the world by August of this year. After that, the amount of available apps for Android will continue to grow at an incredible rate.

The Android Market is growing over twice as fast as Apple’s Appstore. In April alone, 28,000 new apps were added for Android as opposed to on 11,000 for Apple. The study makes a point to say that as of right now, these are the only two companies in the race – as they both add more new apps in a month than other platforms (i.e. Blackberry and Windows Phone) have in total.

In August, research2guidance predicts that Android will overtake Apple with 425,000 available apps. Longer predictions see the Android Market expanded to 700,000 apps by the beginning of 2012. Just as their app offerings hit 700,000, Android OS may as well hold nearly 50% of the smartphone market share, according to Gartner research. 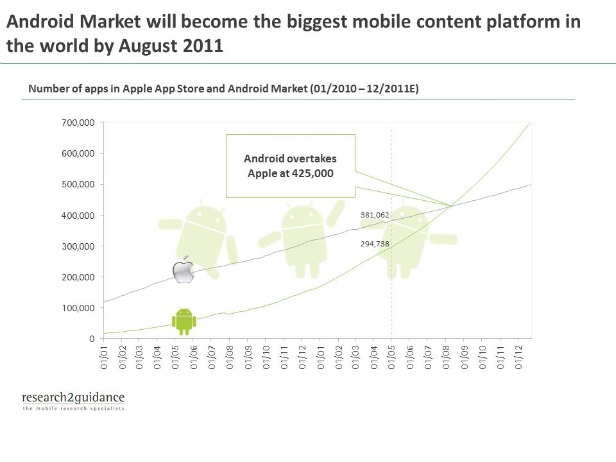 This certainly isn’t the first time we have heard that the Android App Market is on the rise. Earlier this year, as part of their Q1 earnings report, Google announced that over 3 billion Android apps had been installed and that downloads of said apps were up 50% from Q4 of 2010.

Another interesting find from research2guidance’s study – 64% of the current Android apps are free as opposed to 60% of Apple apps.

What does this means for app developers? Here’s what they have to say:

All analysis on the early months of an app store including the Android Market shows that average download numbers decrease dramatically after the first months or even weeks after the launch of the store. The long tail gets longer and longer while the top 5% gets richer and richer.

Although the Android App Market is clearly growing much faster than Apple’s in terms of available apps, the iOS is still king right now when it comes to revenue. In terms of app revenue, iOS currently holds a commanding 47% to 36% lead over Android.