In figures released today, technological researchers Gartner predict that by the end of 2012 almost half of all smartphones purchased worldwide will run on Android OS.

Gartner projects that 2011 sales of smartphones worldwide will jump 57.7% from 2010, topping out at a whopping 468 millions phones. Both the predictions of total smartphone growth and of Android’s dominance mirror a previous study by the IDC.

Gartner believes that Android OS’s success in the future market will be owed much to its use in reasonably priced smartphones. They note that by 2015, 67% of all devices will have an average price of under $300. “As vendors delivering Android-based devices continue to fight for market share, price will decrease to further benefit consumers. Android’s position at the high end of the market will remain strong, but its greatest volume opportunity in the longer term will be in the mid- to low-cost smartphones, above all in emerging markets.,” said analyst Roberta Cozza.

According to the figures, Android OS will control 49.2% of the market by the end of 2012. That is more than iOS, RIM, Microsoft and Symbian combined. iOS is projected to remain number 2, garnering just under 20% of the market share in 2012. Research in Motion is projected to decline each year, as analysts have factored in their shift from Blackberry OS to QNX expected sometime in 2012.

Further projections share the IDC’s faith in the Windows Phone, as Microsoft will leap into 2nd place with 19.5% of the market by 2015. According to Gartner, this is based on Nokia’s adoption of the Windows Phone OS to replace the phased-out Symbian. Android will continue to dominate the long term, only dropping a little to 48.8% share in 2015. 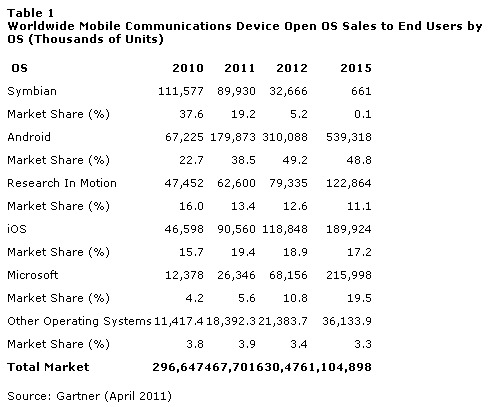