It’s a good bet that the codename "gingerbread" causes employees at RIM, Apple, Microsoft, and Palm to flinch.  The latest stats from comScore show that Android is still on quite a roll even without help from a fresh version of the mobile operating system.

Below, you can see a chart comScore constructed to show how the mobile market changed over a three-month period.  Obviously, the chart represents bad news for everyone who doesn’t collect his or her paycheck from Google. 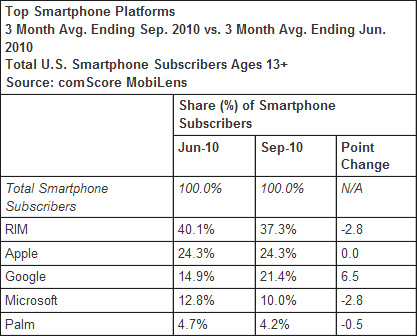 On a month-to-month basis, the situation also looks kind of extreme.  RIM saw its market share decrease from 37.6 percent to 37.3 percent between August and September, Microsoft’s share dropped from 10.8 percent to 10.0 percent, and Palm’s share shrank from 4.6 percent to 4.2 percent.

Google, meanwhile, managed to increase its market share from 19.6 percent to 21.4 percent, and Apple only saw its share rise from 24.2 percent to 24.3 percent.

Here’s perhaps the one bright spot for fans of companies other than Google: comScore noted in a statement, "Despite losing share to Google Android, most smartphone platforms continue to gain subscribers as the smartphone market overall continues to grow."