Android Continues to Demand Marketers’ Attention at a Growing Pace

Earlier this year, we asked which would be more critical to marketing between the iPhone and Android. While not everyone agreed, many of you thought Android. We’ve gotta say, it’s not looking like this assumption is wrong so far.

New data released by Nielsen indicates that Android was the most popular mobile OS in the U.S. among smartphone buyers who purchased devices over the past six months. The data takes into account a full month of iPhone 4 availability. 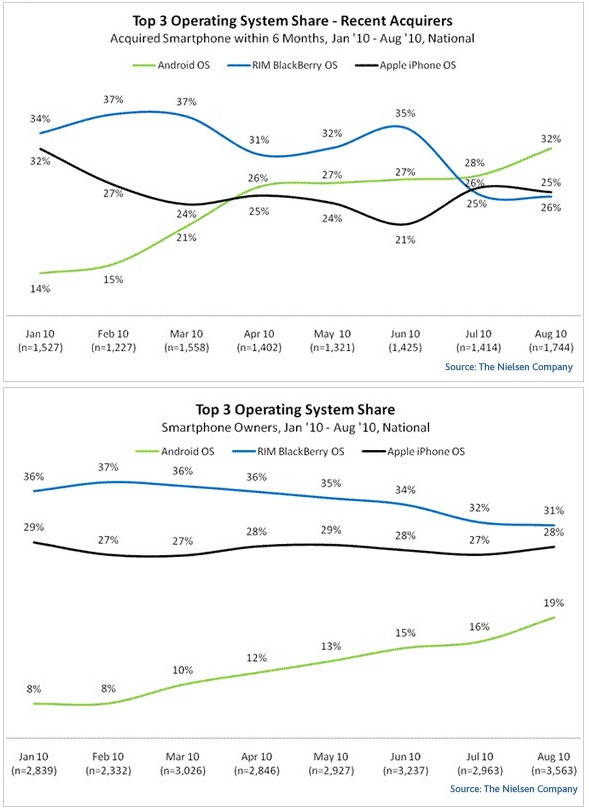 "Among all smartphone owners, Blackberry still holds the dominant share with 31 percent of the market, though its lead over Apple is declining," the firm notes. "Twenty-eight percent of smartphone owners have Apple iPhones, compared to 19 percent who have Android devices."

Clearly Android still has some ground to make up before it catches its competitors that had head starts, but as the charts above illustrate, it’s making that ground up at a pretty good pace. Google TV, due out soon, won’t do anything to slow it down either.

Recent stats from Smaato, which serves over 16 billion ad requests from over 7,000 publishers and over 50 mobile ad networks, indicates that Symbian actually beats all other mobile marketing operating systems when it comes to ads clicked (and Nokia’s new family of smartphones are running this), but Samsung just announced it will no longer support Symbian. Also, rumor has it that Google CEO Eric Schmidt has been discussing the possibility of getting Android on Nokia phones. 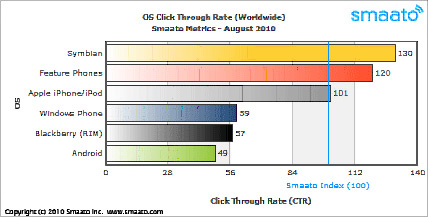 Obviously, you don’t want to ignore any of these major mobile operating systems if you’re trying to maximize your audience, but it helps to know what the people are looking at, and more and more, it seems they are looking at Android. It may be on bottom in the above chart, but how long do you think that will last if sales continue the way they have been?

WebProNews recently had a conversation with Tim Nguyen, a sales manager for mobile marketing firm Trumpia, which has worked with plenty of small and large businesses in assisting them with utilizing mobile marketing to drive traffic and revenue. He gave some pointers for effective campaigns.

How big a factor is Android in your marketing mix? How about mobile in general? Comment here.