One day after a well-met iPad 2 announcement, it’s a solid bet that the iPhone 5 team at Apple just received orders to work a good deal harder.  New stats from Nielsen indicate that, in terms of U.S. smartphone market share, iOS has fallen behind Android.

As the figure below shows, Nielsen believes Android secured a market share of 29 percent during a two-month period ending January 11th.  That puts it just ahead of Apple’s and RIM’s offerings, which are tied at 27 percent, and way in front of the mobile operating systems that Microsoft, HP, and Nokia have created. 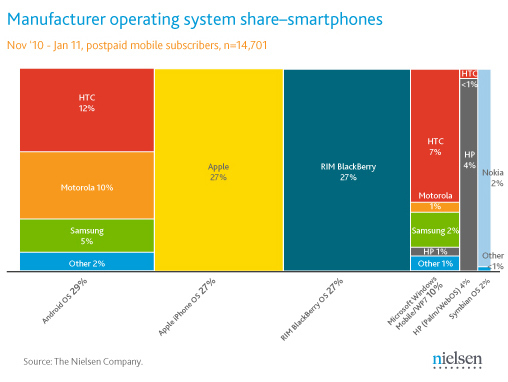 What’s more, another figure indicates Android’s doing quite well in terms of attracting young users.  And that fact’s certain to impress a lot of marketing execs who like to target young people. 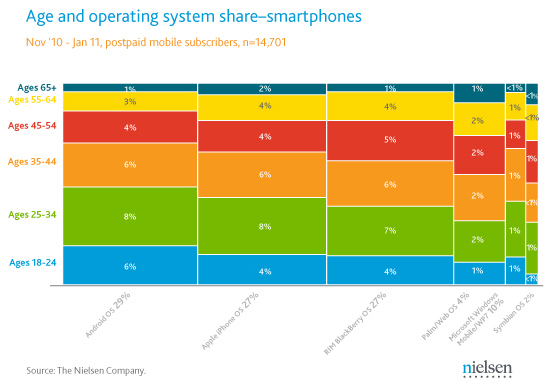 There’s still good news for companies other than Google, however.  Nielsen pointed out in a corporate blog post, "[A]n analysis by manufacturer shows RIM and Apple to be the winners compared to other device makers since they are the only ones creating and selling smartphones with their respective operating systems."

Plus, even as market shares fluctuate in one direction or another, the overall demand for smartphones continues to grow at a rapid pace, ensuring (or at least making it more likely) that there’s money for everyone.

We’ll be sure to continue tracking the competition, in any event.