Android Ad Requests On The Rise

While just about everyone knows that Android is becoming more and more popular, a new report indicates that the mobile operating system is racking up not only users, but also ad impressions.  Millennial Media found that Android ad requests increased by a huge amount between March and April.

A quick note with regards to Millennial Media‘s credibility: in January, the company saw more than 9 billion ad requests, and Nielsen has confirmed that its network reach takes account of 83 percent of the mobile Web.  So these stats should be pretty solid.

As for how Android performed in April, then, Millennial Media’s report stated, "Android ad requests grew 77% month over month.  Since January, Android has grown 282%." 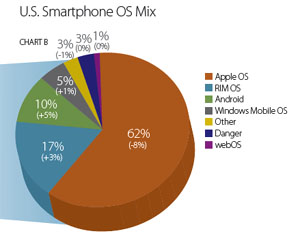 So Android appears to be on its way to becoming advertisers’ best friend, even if it still has some catching up to do in terms of overall market share.  (The chart to the right shows how things looked in that regard in April.)

We’ll be sure to provide an update when the data concerning May becomes available and see how much more progress Android has made.