And Now, The Social Media Weather

The brutal winter weather system that’s been assaulting the United States for the past couple of days has given birth to a nifty moniker.  Calling the event “Snowmageddon,” the inclement weather has taken hold of the lower 48, and as most technologically-savvy Americans are wont to do, they’ve taken to the social media highway to share pictures, tales and related whatnot of their battle with Snowmageddon 2011.

In fact, the Snowmageddon winter has helped establish resources like Twitter and Facebook as being every bit as reliable for current weather conditions as any local news weather forecast.

Granted, many of these tales are told with 140-character bursts, or with images only, but if you really want an idea of how bad it is in Chicago right now, just do a simple Twitter search.  You’ll be greeted with such Tweets as, “chicago is about an inch away from the snow totals of the #blizzard of 78” (courtesy of ironicsilence).

Or you could just search TwitPic for “snowmageddon.” 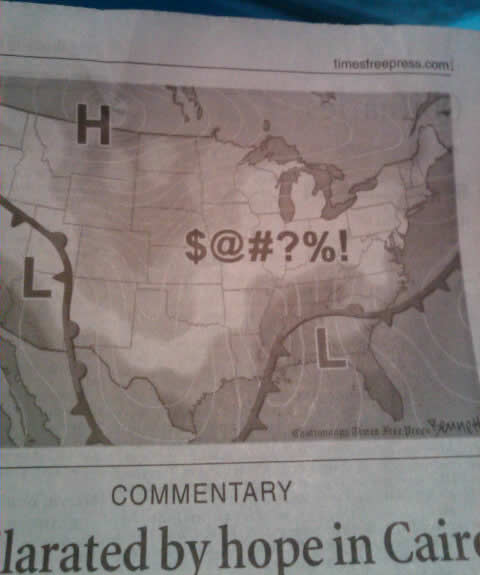 Thanks to the immediacy of Twitter, Facebook, TwitPic, Flickr, and even sites like Fark (which had over 800 comments on their Snowmageddon thread yesterday), you no longer have to wait for “Your weather on the eights” or the local news to tell you how bad things are.  Granted, Twitter, et al, aren’t really much use during normal weather, but once things go south (figuratively) weather-wise, the Internets begin blossoming with tales of snow and ice.

Of course, social media weather isn’t limited to Snowmageddon either, although, there is a great deal of that out there.

Off the northeastern coast of Australia, Queensland is preparing for Cyclone Yasi, and the Australian social media users running to their Twitter or Facebook to share the news.  While a great deal of the Yasi-related content are weather complaints, there’s also a Facebook page about Cyclone Yasi,  and it keeps track of the storm’s progress.

Such uses of social media are important, and it helps elevate the concept — and the industry — beyond the mindless minutiae about what so-and-so had for dinner last night into something useful.  In fact, one can’t help but wonder how the social media revolution would’ve helped with the Hurricane Katrina catastrophe.

It certainly couldn’t have made things much worse.

And then there’s Punxsutawney Phil, a trending topic on Twitter.  Yes, it’s Groundhog Day today, and thankfully, Phil did NOT see his shadow, which means Snowmageddon 2011 might just be over sooner than one might think.  Then again, after all the snow that’s fallen on the US this winter season, it’s easy to understand if people begin to think this winter will never end.