Analyst: Google A “Buy” Regardless Of China

Since Google announced its "new approach to China" on January 12th, the Dow’s gone up 1.20 percent and the Nasdaq’s risen 3.52 percent.  Google’s stock, meanwhile, has fallen 7.41 percent.  But one financial analyst stated today that there’s no need to panic if Google pulls out of China.

Indeed, if Google stops operating in the country, the immediate effect in terms of earnings should be almost impossible to notice.  Google makes very little money in China – "about 1 percent of their total revenue," according to Clayton Moran of the Benchmark Company – "so it’s not a meaningful contributor."

Moran’s maintained his "buy" rating on Google as a result.  It’s only half a decade down the line that a decision to leave China might come to represent a problem.

Moran told CNBC, "Five years from now, it’s about growth and the potential for growth and China’s obviously the largest Internet market by users.  So therefore it was a big opportunity for Google and they’ll miss out on that." 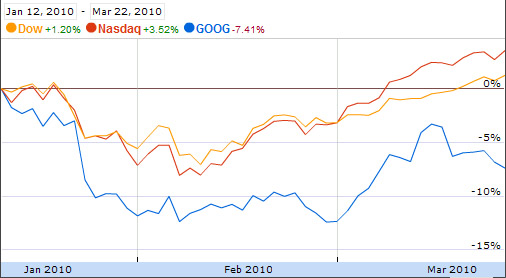 For the record, Baidu’s stock is up 1.84 percent so far today, and has surged 44.06 percent since Google announced that it might leave China.

Americans Increase Use Of Internet And TV Together