Americans spend nearly a quarter of their time online on social networking sites such as Facebook and Twitter and blogs, up 15.8 percent from a year ago (43% increase) according to new research from Nielsen.

The report called "What Americans Do Online," found that Americans spend a third of their online time (36%) communicating across social networks, blogs, email and instant messaging.

Online games surpassed email to become the second most heavily used activity behind social networks, accounting for 10 percent of all U.S. Internet time. Email decreased from 11.5 percent of time to 8.3 percent. 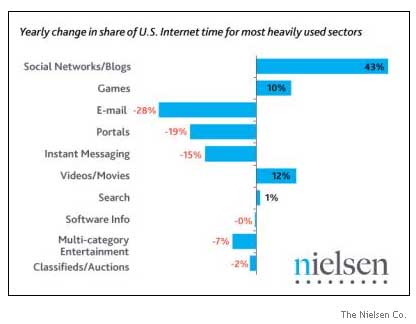 Among the most heavily used categories, videos/movies was the only other to experience a significant growth in share of U.S. activity online. June 2010 was a major milestone for US online video as the number of videos streamed passed the 10 billion mark. The average American consumer streaming online video spent 3 hours 15 minutes doing so during the month.

"Despite the almost unlimited nature of what you can do on the web, 40 percent of US online time is spent on just three activities – social networking, playing games and emailing leaving a whole lot of other sectors fighting for a declining share of the online pie," said Nielsen analyst Dave Martin.

The way consumers spend their online time on their mobile phones is slightly different than their Internet use on computers.  There is a double-digit (28%) increase in the use of social networks,  but email activity via mobile devices continues to increase from 37.4 percent to 41.6 percent of U.S. mobile Internet time.

Portals remain as the second heaviest activity on mobile Internet (11.6 percent share of time), despite their double digit decline and social networking’s rise to account for 10.5 percent share means the gap is much smaller than a year ago (14.3 percent vs. 8.3 percent).

"Although we see similar characteristics amongst pc and mobile internet use, the way their activity is allocated is still pretty contrasting, added Martin.

"While convergence will continue, the unique characteristics of computers and mobiles, both in their features and when and where they are used mean that mobile Internet behavior mirroring its PC counterpart is still some way off."

Roger Ebert Finds Many People Would Pay For Twitter