Americans Increase Use Of Internet And TV Together

Americans upped their overall media usage and multitasking in the fourth quarter of 2009, according to Nielsen’s latest Three Screen Report.

"The rise in simultaneous use of the web and TV gives the viewer a unique on-screen and off-screen relationship with TV programming," said Nielsen Company media product leader Matt O’Grady. 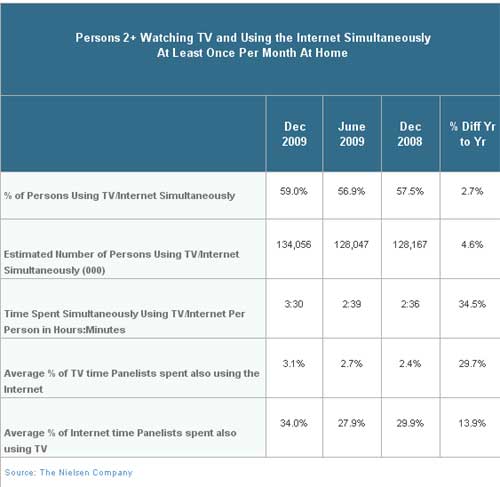 "The initial fear was that Internet and mobile video and entertainment would slowly cannibalize traditional TV viewing, but the steady trend of increased TV viewership alongside expanded simultaneous usage argues something quite different."

Online video viewing is up 16 percent from last year. Nielsen says 44 percent of all online video is being viewed in the workplace. Americans watch network programs online when they miss an episode or when a TV is not available. Online video is used similarly to a DVR and not typically a replacement for watching TV.

"It seems that, for the foreseeable future at least, America’s love affair with the TV will continue unabashed," said O’Grady.

"We seem to have an almost insatiable appetite for media, with online and mobile programming only adding to it."

Analyst: Google A "Buy" Regardless Of China