The survey of 2,259 U.S. adults, conducted jointly by the Pew Internet & American Life Project and the Project for Excellence in Journalism, found 59 percent of respondents gets news from a combination of online and offline sources on a typical day.

The Internet and mobile technologies are at the center of how people’s relationship to news is changing. One-third (33%) of cell phone owners now access news on their mobile phones and more than a quarter (28%) of Internet users have customized their homepage to include news from sources and topics that are of interest to them. 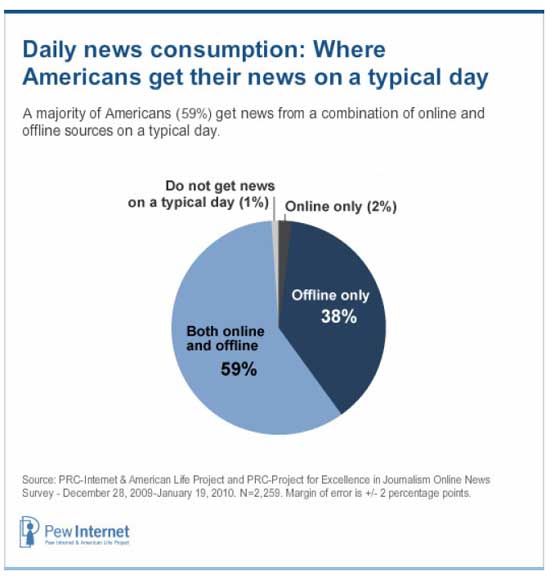 Nearly forty percent (37%) of Internet users have contributed to the creation of news, commented about it, or shared it via postings on social media sites like Facebook and Twitter.

In addition, people use their social networks to filter, assess, and react to news. They use traditional email and other tools to exchange stories and comment on them.  Among those who get news online, 75 percent get news forwarded through email or posts on social networking sites and 52 percent share links to news the same way.

The survey also found the typical online news consumer routinely uses just a handful of news sites and does not have a particular favorite. Overall, Americans have mixed feelings about this "new" news environment. Over half (55%) say it is easier to keep up with news and information today than it was five years ago, but 70 percent feel the amount of news and information available from different sources is overwhelming.

"Americans have become news grazers both on and offline – but within limits," said Amy Mitchell, deputy director for the Pew Research Center’s Project for Excellence in Journalism.

"They generally don’t have one favorite website but also don’t search aimlessly. Most online news consumers regularly draw on just a handful of different sites."

Look for Ways to Manage Your Social Media Time Better