Have you had a chance to try Lendle yet?  If not, you may never get the chance.  Today Amazon revoked the application’s API access.  Lendle, a program that allowed Kindle users to lend books from their libraries to friends for a couple week period, was only in operation for around 6 weeks.

If you go to the Lendle website, this is what you will see: 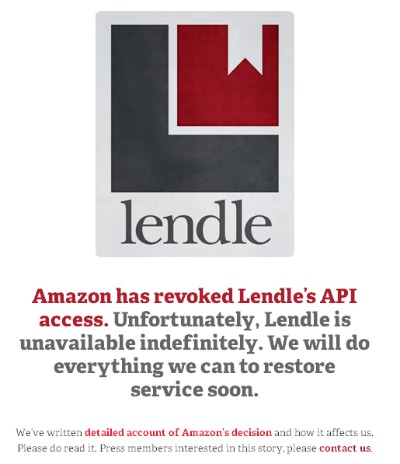 Jeff Croft, co-founder of Lendle, wrote a statement explaining how they feel about Amazon’s decision.  From the statement:

Earlier today, Amazon revoked our API access. Lendle relies heavily on Amazon’s API, so this effectively shut the site down. The letter we received from Amazon states that the reason our API and Amazon Associates accounts have been revoked is that Lendle does not “serve the principal purpose of driving sales of products and services on the Amazon site.”

Croft disputes that last bit from Amazon, saying that Lendle’s philosophy is: “You can’t borrow if you don’t lend, and you can’t lend if you don’t buy.”  Lendle requires a user to be willing to lend from his own Kindle collection before they can borrow from a friend’s collection.  When users synced Lendle with their Kindle accounts, it made sure that lendable books purchased through Amazon were being traded.

A win-win for all involved, right?

At least that’s what Croft thought, as he explains in the statement.  He expresses shock, saying “I know many people at Amazon, and everything I’d heard was that most inside Amazon were big fans of Lendle-even up to higher-ranking managers.”

As such, three options remain: Either Lendle gets its API access restored, they find a way to run the service without relying on Amazon’s APIs or the lending service is finished.  Croft doesn’t believe the latter is an option:

“It may take us a bit of time to rebuild, but one way or another, we’ll continue lending eBooks.”

Is this a bad business decision for Amazon, as lending apps promote book sales?  Tell us what you think.

Firefox 4 Official Release - Was It Worth The Wait?