Amazon has launched the Mac Download Store, a direct competitor to Apple’s own Mac App Store, which was launched earlier this year. This follows another recent move by Amazon, when it released its own version of the Android Market.

Amazon’s Mac Download Store has a reported 250 available titles in the software and games categories, and those include some things Apple’s store doesn’t sell. For one, Amazon features Microsoft Office for Mac right at the top of the store – this being one of those titles not available from Apple.

According to The Loop, it also has games from Feral Interactive, Electronic Arts and Aspyr.

Apple’s store launched with 1,000 apps, and I’m sure has gained a significant amount since then, but Amazon’s store is sure to grow, and just may have more lenient policies in terms of what apps are accepted. This could be incredibly attractive to developers who have famously had to battle with Apple’s regulations. 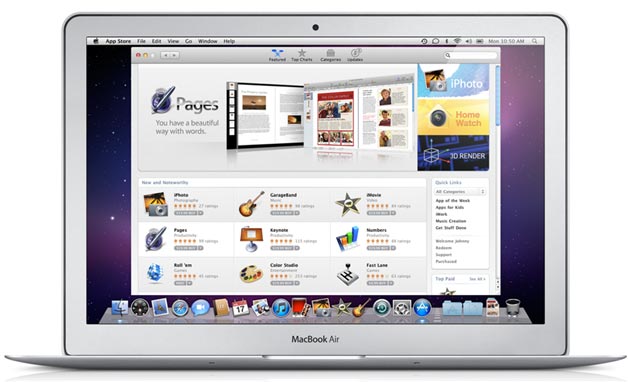 Amazon is quoted as saying, “Mac Download store features an install-less download process where the customer gets just the product without any unwanted extras, making for faster and easier purchases. Plus, downloads are conveniently backed up in your Games and Software Library where you can download an unlimited number of times for personal use.”

Amazon’s move to launch the Download Store comes after a bit of bickering with Apple over the “App Store” name, which Amazon is actually using for its Android app market. It also comes just in time for Apple’s new MacBook Air, which is expected within the next two months, as well as Apple’s Mac OS upgrade to be unveiled next month at the company’s Worldwide Developer Conference.