As the price battles heat up in the world of e-readers, Amazon has announced that it is offering its Kindle with 3G at a lower price – if you can tolerate the advertising.

The new Kindle 3G with Special Offers will run customers $164, 25 bucks cheaper than the original Kindle 3G which retails for $189. The new member to the Kindle family will have all the features of the original – free 3G, Pearl e-ink display and an 8.7 ounce body. The only difference is that it is ad supported.

The Kindle 3G with Special Offers will work the same way as the Kindle with Special offers that Amazon launched in April. That Kindle only has wi-fi capability and costs $114, $25 less than the regular Kindle wi-fi.

The ad supported Kindles have promotions sponsored by Amazon partners like Visa, Olay, Buick and Chase that appear on the home page and as screensavers. The ads do not interfere with the text of your e-books. 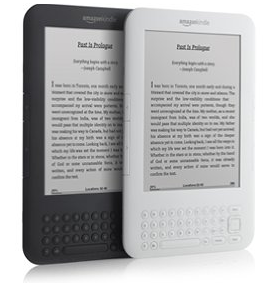 The “special offers” that are promoted via the device are things like “$10 for a $20 Amazon gift card” and “Save 20% on over 200 HDTVs available through Amazon.com.” So if you are strapped for cash and don’t mind putting up with some minor advertising, these “special offer” Kindles are for you.

The Kindle wi-fi with Special offers looks like it was a big success for Amazon:

“Kindle is the bestselling e-reader in the world. It’s been just six weeks since we introduced the new $114 Kindle with Special Offers, and already customers have made it the bestselling member of the Kindle family,” said Jay Marine, Director, Amazon Kindle.

This news comes on the heels of Barnes & Noble’s announcement of their new Nook Simple Touch Reader for $139. It boasts a touch screen and is the smallest, lightest e-reader on the market. And Monday, Kobo announced its new eReader Touch Edition for $130.

These new releases and price wars can only signal good news for consumers, as e-readers continue to get more affordable.