Amazon Emerges as a Major Player in Digital Advertising

“Amazon” and “ads” are two words that are not usually associated with each other. However, that will soon change as Amazon appears set to become the third largest online advertising platform in the United States.

According to eMarketer, there’s a strong possibility that the retail giant will surpass Microsoft and Verizon in terms of online advertising this year. The company estimated that Amazon’s advertising arm will bring in around $4.6 billion in profits in 2018. This gives Amazon a 4.1 percent slice of the advertising pie. What’s more, $1.6 billion of that revenue would likely come from mobile ads, giving Jeff Bezos’ company a 2.1 percent share of America’s mobile ad market.

Alphabet (Google) and Facebook remain the market leaders, controlling 37.1% and 20.6% respectively. However, eMarketer theorizes that Amazon’s share will reach 7 percent by 2020, while Google and Facebook’s combined hold on the market will drop to 55.9 percent. 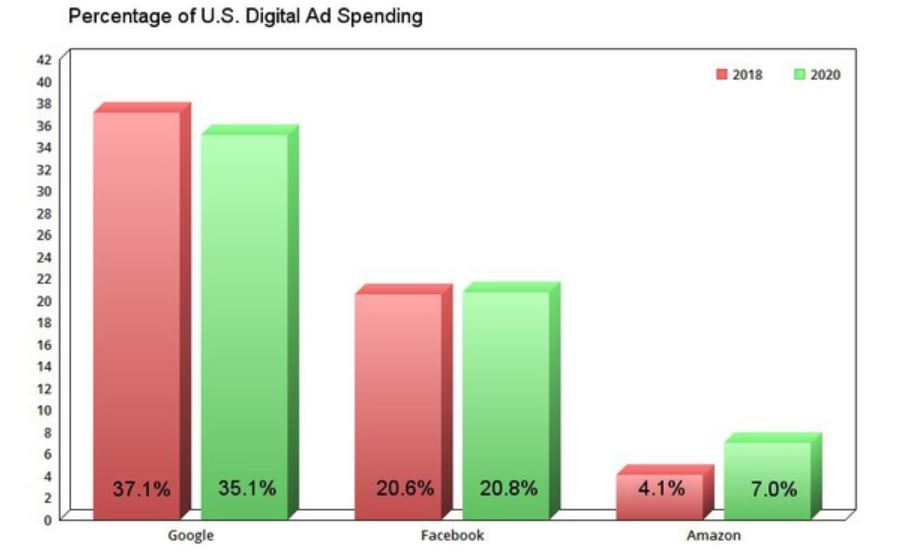 The news of Amazon’s emerging ad dominance is unexpected as the company is more known for making money from its online store and cloud services. Meanwhile, consumers who use the company primarily for shopping or watching videos rarely notice the ads that permeate Amazon’s services. However, these ad products have been steadily growing. It includes paid ads on Amazon’s own marketplace while also facilitating advertisements on other sites.

Most people are unaware of this but the retail giant’s advertising arm used to have three key divisions—the Amazon Media Group (AMG), Amazon Advertising Platform (AAP), and Amazon Marketing Services (AMS). In a bid to make it easier for brands to buy ads, the three groups were merged into a single unit early this month and renamed “Amazon Advertising.”

Amazon’s SVP of Advertising Paul Kotas explained in a blog post that merging the three groups was another step in the company’s goal of “providing advertising solutions that are simple and intuitive for the hundreds of thousands of advertisers who use our products to help grow their business.”

The company is also looking into ways to push its advertising further. For instance, Amazon has rolled out a new service dubbed “Scout.” The feature offers suggestions for visually-inclined products, like shoes and furnishings, based on the customer’s preferences. A spokesperson for the company explained that Scout is a novel way of shopping. It provides customers the chance to browse thousands of items and refine their selections based on the products’ visual characteristics.

The changes that Amazon has made clearly shows that the company is setting its sights on advertising. It further reinforces CFO Brian Olsavsky’s claims during July’s investors’ call that Amazon’s advertising arm is a rising star and will soon have an impact on the business’ overall gross revenue.