“Satisfaction with e-commerce and retail is off from a year ago overall, but the individual company results are mixed, and some organizations manage to find ways and resources to improve the customer experience,” said ACSI Founder Claes Fornell, professor at the University of Michigan’s Ross School of Business.

“Still, any downward pressure on satisfaction does not bode well for sustained spending growth at a time when the economy could use it.”

Online retail fell 3.6 percent to 80, as customer satisfaction with smaller e-retailers dropped significantly. Some of the well known names in ecommerce continue to do well. Amazon (+1% to 87) and Netflix (-1% to 86) switch places at the top of the industry, and eBay gains 3% to 81. Amazon may have had smaller profits than predicted, but it grew its market share and is in position to continue to lead the industry in sales. Netflix may prove to be ahead of the online entertainment curve by offering less expensive streaming-only accounts. 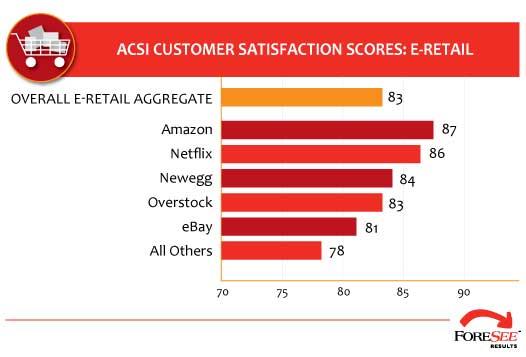 “In any economic downturn, both businesses and consumers look to improve their bottom line, but the largest companies with the flexibility to offer the discounts and promotions that will satisfy a thrifty consumer and engender long term loyalty,” said Larry Freed, president and CEO of ForeSee Results.

Customer satisfaction with online brokerage remains flat at 78, but Charles Schwab overtakes Fidelity at the top for the first time ever.  Charles Schwab gains a point to 80, while Fidelity moves in the opposite direction, slipping one point to tie the industry aggregate of 78. But the biggest mover is E*TRADE, which gains 3% to 76 and has improved 10 points since it was first measured in 2000.

“Charles Schwab and Fidelity know their customers better and are beating the Internet pure-play e-brokerages, which is impressive for the oldest and most traditional names in the game,” said Freed.

“But E*TRADE is carving itself a niche by targeting a different kind of customer and has made big strides over the last ten years in terms of satisfaction, which is a proven predictor of financial results.”

Customer satisfaction with online travel is up 1.3% to a new all-time high of 78 and an increase of 4% since 2008.  Expedia scores 79 to lead the industry, and it has led or held a share of the industry lead since 2000.  The “all others” aggregate of smaller online travel sites like Kayak.com gains a point to 79. Travelocity climbs 3% to 77 and Orbitz slips 1% to 75.  Priceline drops 4% to 73, losing most of what it had gained last year.

Criterion Collection Comes To Hulu Plus