Amazon has announced an update for its Kindle apps for iPad, iPhone, and iPod Touch that lets users see embedded video and hear audio clips within Kindle books. Of course new books that actually take advantage of this functionality have been announced as well.

The first books to utilize it were Rick Steves’ London from Rick Steves and Together We Cannot Fail by Terry Golway. However, there are 13 on the list currently (including more Rick Steves books).

"We are excited to add this functionality to Kindle for iPad and Kindle for iPhone and iPod touch," said Dorothy Nicholls, director, Amazon Kindle. "Readers will already find some Kindle Editions with audio/video clips in the Kindle Store today–from Rose’s Heavenly Cakes with video tips on preparing the perfect cake to Bird Songs with audio clips that relate the songs and calls to the birds’ appearances. This is just the beginning–we look forward to seeing what authors and publishers create for Kindle customers using the new functionality of the Kindle apps." 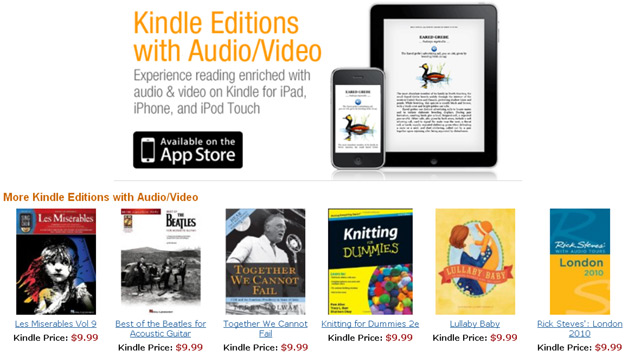 "In the new Kindle Edition with audio/video of Rick Steves’ London, the embedded walking tours allow customers to listen to Rick as they explore the sites of London," said Bill Newlin, publisher, Avalon Travel. "Rick’s narration adds depth to the reader’s experience, while listeners can follow the routes more easily with the text."

Last week Amazon lowered the price on its actual Kindle device in response to a lower price on the competing Nook from Barnes and Noble.