Aircell, a company that provides wireless inflight Internet access to a number of major airlines in the U.S., has introduced a new monthly subscription plan for its Gogo service.

The Gogo Monthly Subscription is aimed at frequent fliers and is available for $34.95 each month. Aircell says the service automatically renews each month.

"Building on the strong demand for our existing 30-Day product, frequent flyers are telling us that they want a single pass that provides a seamless and convenient way to stay connected across all Gogo equipped airlines," said Michael Small, Aircell’s President and CEO. 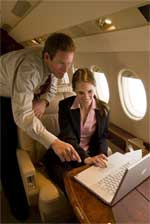 Users can purchase the Gogo Monthly Subscription via the inflight portal. After registering, users will have Internet access on all Gogo equipped flights. The number of airplanes that are Gogo equipped stands at more than 800.

Gogo Monthly Subscription will initially be available on AirTran Airways, American Airlines, Delta, and Virgin America. Aircell says those airlines have a high percentage of their fleets equipped with Gogo.

Aircell’s goal is to offer airline passengers a variety of pricing options. The company will still offer Gogo passes for single flights starting at $4.95.

Gogo is currently available on all AirTran and Virgin America flights and on some Air Canada, American Airlines, Delta, US Airways and United flights. Later in 2010, Gogo will be available on Alaska Airlines and Continental Airlines.