Age Differences Between MySpace and Facebook Users
comScore’s recent digital year in review reveals that the MySpace demographic has gotten younger over the last year whereas Facebook’s 24 & under crowd decreased and its 25-34 year segment increased.
An analysis of demographic composition of Facebook, MySpace and Twitter users revealed important differences that reflect their appeal to various audiences. MySpace saw its user composition shift toward younger audience segments in 2009, with people age 24 and younger now comprising 44.4 percent of the site’s audience, up more than 7 percentage points from the previous year. Facebook’s audience, by contrast, was evenly split between those younger and older than 35 years of age. The most noticeable demographic shift on Facebook during the year occurred with 25-34 year olds, who now account for 23 percent of the audience, up from 18.8 percent last year. 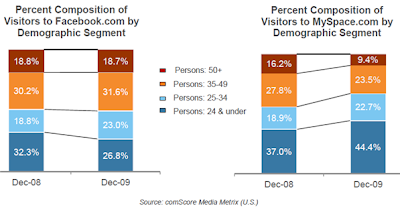 3D Printer Can Make You Anything