AdMob, which Google recently got the green light from the FTC to acquire, has released its monthly Mobile Metrics Report (pdf), this time detailing the global base of Android, compared to that of the iPhone.

During a keynote presentation at Google I/O, in which the company unveiled the latest version of Android, Google announced that Android sees about 100,000 activations a day. Apple claims to have sold 85 million iPhones and iPod Touches in three years.

AdMob finds that Android had its greatest concentration of unique devices in North America (75%) in April, followed by Asia (12%), and Western Europe (11%). Sitting in on an Android press conference last week, I heard the Android team talk about some of the challenges their OS faces, and one that they mentioned was international expansion. For example, one person at the conference expressed some dissatisfaction with the availability of Android devices in Latin America.

Sidenote: We spoke with Andrew Kameka of Androinica at Google I/O about some of the challenges surrounding Android: 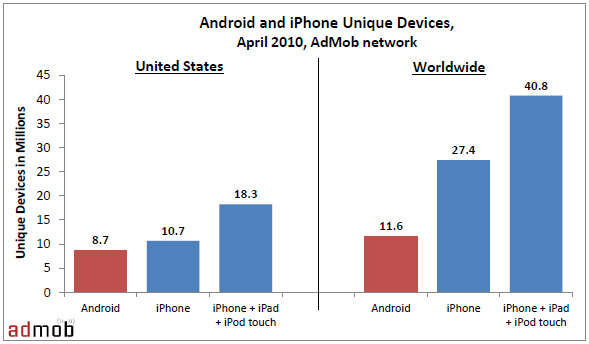 Some other key findings from the AdMob report:

– Over the past 12 months, unique iPhone OS device growth was strongest in Asia (474 percent), followed by Oceania (367 percent) and Western Europe (269 percent).

The iPhone OS vs. Android OS outlook may be put into greater perspective in another year. Android-based tablets are expected to be on the way, and Google TV, which integrates with Android could play a significant factor in itself. Not to mention that Andy Rubin is talking about how the next six months of Android are going to be "mind blowing."