I can’t remember the last time I went without my smartphone. Camping in the Blue Ridge Mountains, miles away from civilization, I still walked far enough out to get a signal and some edge service. Don’t judge, it was the NCAA tournament and my Cats were playing. Apparently, I’m not alone in my inability to disconnect. A new study shows that students experience withdrawal similar to drug addiction when separated from the internet – for just one day.

A global media study called “The World Unplugged” asked 1,000 students aged 17-23 to abstain from any form of media for a whole 24 hours. The study, run by the International Center for Media and the Public Agenda (University of Maryland), compiled surveys from young adults in ten countries around the world, including Lebanon, China, Uganda, Argentina and the U.S.

The researchers found that if the students were able to completely abstain (a big if), then they reported anxiety, cravings and depression. They felt disconnected from the outside world, and felt as though they had lost a part of themselves by extension. A student from the United Kingdom said that he “was an addict.” An American student said that he “was itching, like a crackhead because [he] couldn’t use his phone.” A student from Slovakia said they “sometimes felt dead.”

How addicted are you to social media? Tell us what you think

Whoa. Weighty stuff. I wouldn’t be too quick to toss this up to juvenile dramatics, however. I’m not sure that many of the reactions to a no-media day would be any different coming from 40-something business professionals. The researchers documented the responses in what they call the “addiction grid.” 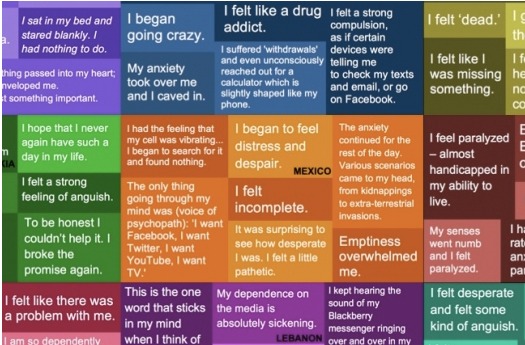 Some major observations made by the study:

The study apparently caused some students to lament their addictions to media, and espouse the benefits of “unplugging.” Directly from the study;

“We live too quickly,” said a student in Slovakia. “We call our friends or chat with them when we need them – that is the way we have gotten used to relationships.” And the problems for some students went beyond loneliness. Some came to recognize that ‘virtual’ connections had been substituting for real ones – their relationship to media was one of the closest “friendships” they had.

Although some students felt the benefits of unplugging, most felt anxiety, boredom, isolation and distress.

Young people around the world care most about whatever latest hardware or app can connect them most quickly to the people they most value. The students may have settled in for the foreseeable future with familiar social networks (Facebook, Twitter), they may have definite preferences about their favorite brands of phones (Blackberry v. iPhone), but the next “better” thing will get quickly picked up by the early adopters, and either steal market share or entirely displace older tools and technologies.

Whether addiction to technology is a real condition or not, people seem to feel addicted. And really, that’s all that matters.

Have you ever tried to sustain long periods of time without the internet? Let us know.