Actor Corey Haim, best known for roles in movies like the Lost Boys, License to Drive, and many others (a number of which also featured Corey Feldman), has reportedly been found dead of an apparent drug overdose.

>>> You can leave your condolences on FamousDead.com.

The Los Angeles Police Department said Haim, 38, was pronounced dead after 3 a.m. at a Burbank hospital. He had been living in the San Fernando Valley.

Details of his death were not immediately available. The L.A. coroner’s office was investigating. A police spokesman said more details would be available later.

Haim connected with his fans through social media, specifically a MySpace page, which currently has 4,253 friends. 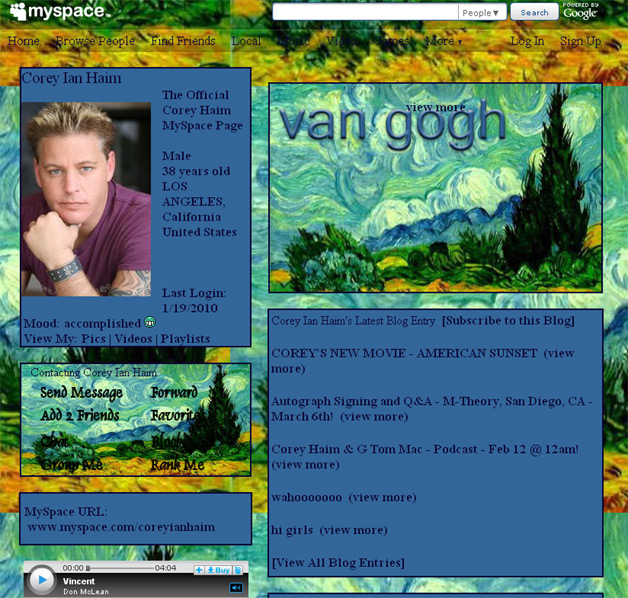 The "about me" section reads:

The real Corey Haimster here! I asked Jenny J to set this up for me, so here it is. I’ll be checking in to read all your shout outs & when I get the time, I’ll leave a message for you all. Thanks for hitting my MySpace page!
Love & peace out,
Corey

"Actor Corey Haim" and "Lost Boys" are currently both trending topics on Twitter.

Haim’s latest movie American Sunset premiered in Las Vegas in January. He had also been seen in the realty TV show The Two Coreys with Feldman. More on Haim here.