A Glimpse of This Year’s Upcoming Gadgets

As you are probably aware, the Consumer Electronics Show (CES) has been going on this week, and will continue to do so through Sunday January, 10. WebProNews is in attendance, and will be periodically posting exclusive video interviews and looks at new products, continuing after the show is over.

What are your favorite releases from CES? Tell us in the comments.

As one would imagine, there have been quite a few announcements made up to this point. Due to the incredible amount of companies presenting products at the event (find the entire 400 page directory here), it would be near impossible to cover everything, but let us reflect upon some of the highlights.

Microsoft has had quite a few things to talk about at CES. The company unveiled a new HP Windows 7 slate device, as well as some other new Windows 7 devices from Sony and Lenovo. Microsoft and HP are teaming up ohn search and portal experiences, which will see Bing as the default search engine, and MSN the default homepage on HP PCs in 42 countries.

Microsoft CEO Steve Ballmer announced the upcoming exclusive availability of the HTC HD2 in partnership with T-Mobile and HTC. Microsoft announced Mediaroom 2.0, the next version of its IP TV solution for service providers. The company also announced a handful of big-name video games coming to the XBox (like the new Halo), Game Room on XBox Live, and Project Natal, the controller-free gaming experience.

Intel launched a whole new family of processors. HP unveiled a new touch notebook and some new minis. Palm announced a couple of new handsets, updates to the webOS platform, and a deal with Verizon.

Internet-ready television and video in general have been frequent themes throughout the event. Netflix announced deals with five new partners to create Netflix-ready TVs and Blu-ray players. DivX showed off a new online TV platform. Yahoo made multiple strides on the connected TV front, and introduced new hardware partnerships.

Cisco unveiled some big plans it has in the way of video. The company announced new customers, features, and professional service options for the Cisco Eos social entertainment platform, and that it is providing a medianet to NBC during the network’s coverage of the 2010 Vancouver Winter Olympic Games. The company also announced some impressive data for Flip Video during the holiday season.

Boxee is also showing off the details of its Boxee Box and Boxee Beta became available for general downloading. Opera released some new software development kits and a new browser. Research in Motion (RIM)unveiled the BlackBerry presenter, which is a way to show PowerPoint presentations, PDFs, etc. right from your BlackBerry device. 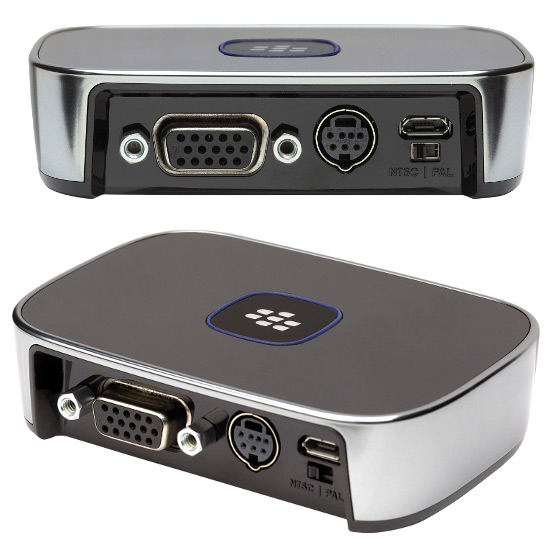 Samsung is one company that has had a lot of announcements at CES. They announced their first e-readers, a new "eco-friendly" external hard drive family, a new slim external DVD writer for laptop and netbook markets, a new app store for TVs, Blu-Ray players, home theater systems and mobile phones, a new series of Plasma HDTVs, a new series of LED HDTVs, a new series of LCD TVs, new Blu-ray players, home theater systems, standalone AV receivers, and a four-door refrigerator. The company also teamed with DreamWorks Animation and Technicolor to form a global strategic alliance for 3D home entertainment.

HD Radio is involved with a lot of exhibits at CES. There are 25 new HD Radio products being introduced and 15 auto brands will be producing over 80 vehicle types this year, with 36 of them including HD Radio technology.

There are hundreds of car-related electronics exhibits at CES, but the most attention has been given to Ford and its Internet-ready vehicles.

The Open Internet has been heavily promoted throughout CES, thanks to the Open Internet Coalition, who has distributing buttons and laptop stickers throughout the CES event, with a quick response code. When captured by a reader on a mobile device, the QR code will launch a webpage, which allows users to add their names to a petition supporting the FCC’s proposed rules for maintaining an open Internet.

CEA President and CEO Gary Shapiro announced that the consumer electronics industry is set to generate over $165 billion in U.S. shipment revenues this year.

The things discussed in this article really only scratch the surface of the things being showed off at CES. Stay tuned to WebProNews and the WebProNews Video Blog in particular for exclusive looks at a lot of the products from the event.

How do you rate this CES compared to years past? Share your thoughts. Talk about some of the other products from CES in the comments.