A rep for Samsung emailed WebProNews to tell us that Samsung has reached 2 million apps downloaded for its smart TVs in 53 days. Not quite as impressive as Apple’s Mac store hitting a million app downloads in a single day, but the connected TV industry is a bit of a different beast. The rep writes:

Samsung Apps continues to gain significant traction among consumers – in a short span of 53 days, over 1 million apps were downloaded to Samsung smart TVs globally. This means that over 2 million apps have been downloaded to date with the one millionth app downloaded in November, and 268 days after the store’s launch last year.

Samsung Apps create an inclusive experience that brings people together in the home. We continue to lead the industry by partnering with apps developers to deliver the best entertainment experiences on their TVs and make them smarter. For example, as a result of our partnerships and the recent Samsung Free the TV Challenge, people will have access to apps that allow them to explore the universe in 3D, take a Pilates class together, track live sports scores, play games or search out the latest online video – including in 3D. 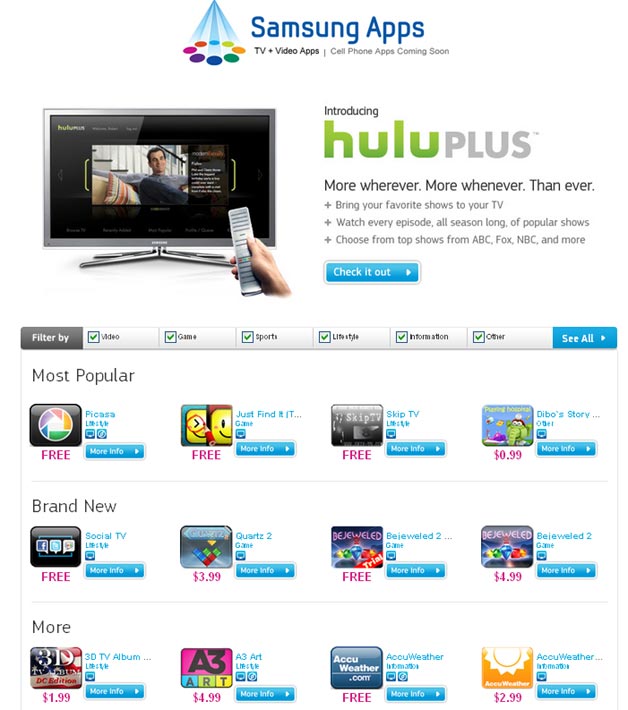 Many of Samsung’s apps are free, ad other cost anywhere from 99 cents to $4.99 (at least that appears to be the range so far).

While Samsung’s App store only consists of TV and video apps for the time being, the company does indicate that cell phone apps will be coming soon.

Rumors of Friction Between Schmidt and Google Founders Surface