Mozilla has served its 2 billionth Firefox Add-on download. The download rate has been increasing each year, but Firefox also faces increasing competition in the open source browser market.

Mozilla’s milestone is certainly a significant one though, and there’s no question that Firefox has been revolutionary in the web browser space. 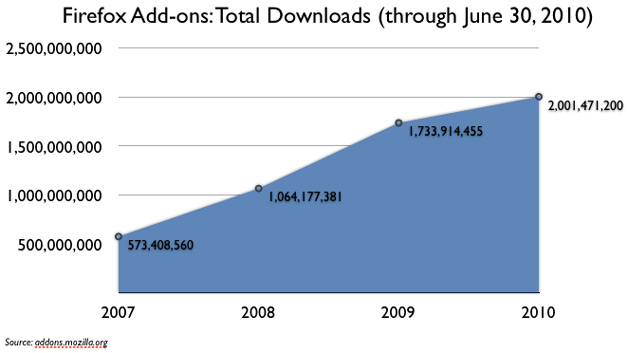 "This exciting feat was made possible by the huge community of people who have made and used Firefox Add-ons since we launched in 2005," Mozilla says in its announcement. "Over the years, we remained dedicated to building features and products that make Firefox the world’s most customizable Web browser for consumers and developers."

Mozilla has put up a "Best of 2 Billion Firefox Add-ons" list based on feedback. There are 25 add-ons in the collection, with the top one being Adblock Plus.