In late 2008, the Android Market launched, and ever since, it’s apparently been growing at faster and faster rates.  New research depicts the number of submitted apps as an ever-rising curve, and more importantly, shows that the number has topped 100,000.

AndroLib, which put the graph together, believes that figure’s accurate.  Or that if it is off the mark, it’s too low.  Google hasn’t confirmed or denied anything, as usual.

Anyway, the AndroLib blog post reported, "As we see the number of applications crosses the 100,000 mark, we are confident in saying that at least 100,000 applications have been submitted to the Android market since its creation." 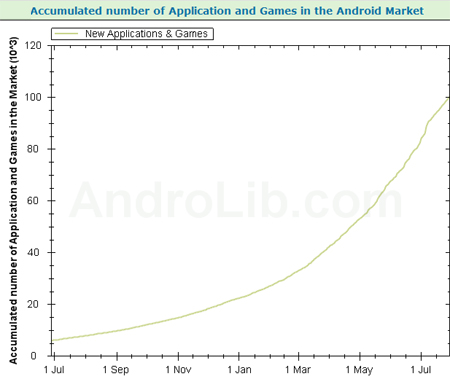 Then, in regards to how many apps have made it through the submission process and/or not gotten removed, the post stated, "[W]e evaluate that there are 83,000 active applications in the Android market."

Both of those numbers are quite big.  Big enough to make growth beyond this point not matter much, even, since it’s hard to imagine how another 10,000 wallpaper or weather apps will do Android users any good or make the mobile operating system more appealing than Apple’s offering.

The trick at this point might be ensuring that the apps stay up to date as new versions of Android are introduced, since fragmentation remains a much-discussed threat.

WebProNews IT Team Confirms Facebook "Leak" Not Much of a Story