Sports-seeking cord cutters might have reason to rejoice, or at least reason to hope:  there’s a possibility YouTube will become a major player in the way sporting events, specifically, the NBA and the NHL, will be consumed by their fans.

After the success YouTube enjoyed from streaming of cricket from the Indian Premier League, Google’s online video service is looking to expand its reach by including the NBA and NHL in their sports stream lineup.

While there’s a lot being made about how such agreements would potentially increase YouTube’s revenue stream, making them a viable with such services like Netflix’s Watch Instantly, Amazon and Hulu Plus, the fact that YouTube continues to pull in incredible amounts of traffic makes these concerns somewhat unfounded. 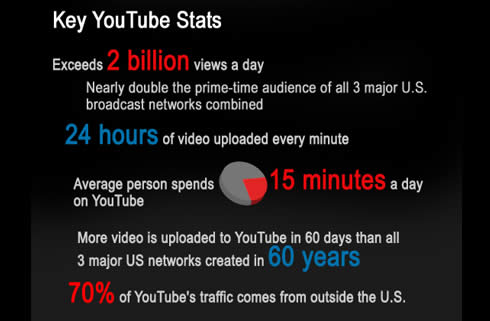 And these are almost a year old
Image courtesy

Nevertheless, there’s no denying how much stronger such features would make the already-powerful YouTube, but there more significant, non-business related issues at hand:

First off, there are no dedicated streams of NBA or NHL games.  Yes, these many of these games can be found through unauthorized streaming services, but having a legitimate, powered-by-YouTube, service that offers legal streams would be a windfall both financially and as a method that further strengthens YouTube’s dominant user base.

Considering the way the NBA and the NHL have embraced YouTube, such a partnership seems quite natural, not to mention, beneficial for all parties involved.

Furthermore, when you take into account the NBA’s labor issues, an additional revenue stream as powerful as the Google/YouTube platform would certainly benefit the NBA’s coffers as much as the platform offering the streams.

Not only is YouTube looking to add the NBA and NHL, they also have their sites set on European soccer; but their vision doesn’t stop there.  According to Bloomberg, Gautam Anand, Google’s director of content partnerships for Asia Pacific, says:

“It’s fair to say that there will be a lot more appealing sports content you’ll see on YouTube.  We have ongoing conversations with pretty much everyone.”

Spokespersons for both the NBA and NHL were fairly mum on the topic.  The NHL offered no comment and the NBA offered a compulsory response saying they’re glad YouTube recognizes the value of live sports. Hopefully, David Stern, Gary Bettman and any other sports commissioners involved in these negotiations recognize the potential value partnering with a service as powerful as YouTube can provide.