Since the devastating earthquake and following tsunami in northern Japan, technology has played a huge role in helping people connect with family and friends involved in the disaster.  On the heels of Google Person Finder, the search tool that also allows users to update current information on those affected, comes YouTube Person Finder, its video cousin.

Announced via Official YouTube Blog, they report that the Tokyo Broadcasting System (TBS), a major Japanese TV station, has been shooting video messages at shelters around the affected areas.  As of Sunday the blog reported that around 80 videos had been uploaded, and a recent count shows around 90.  YouTube also says they are in the process of expanding the scope of the site:

“We’ll try to increase the number of videos by adding more more content from other TV stations and news network in the coming days.  We’re also trying to include videos shot by the individuals impacted themselves, but we have to wait until the infrastructure situation there recovers.” 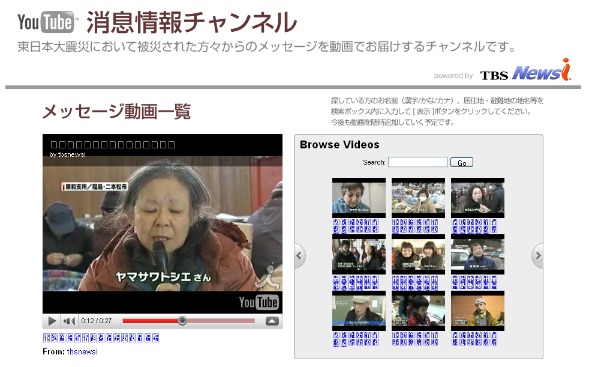 The search tool allows you to search by name, home location or by specific shelter.  Three character formats are supported: Kanji, Katakana and Hiragana.  English characters are not supported.  There is no doubt that when user-submitted content is integrated into the search, this will become an incredibly important tool for victims and their families.