Spotify on the Future of Music Delivery

I sat in on the Future of Music Delivery Keynote interview with Spotify CEO Daniel Ek and author Eliot Van Buskirk on the last day of SXSW Interactive. Buskirk’s covered the digital media industry for ten years in various publications. This keynote was not nearly as crowded as the Evan Williams one was at the beginning, but definitely kept a lot more people hanging around through its entirety.

The first part of the keynote was essentially a product demo for Spotify, and I can’t imagine that an hour of that would’ve kept people around (nothing against the service itself), but things got more interesting once it turned to more generalized conversation between the two on stage, about where digital music is going (if Spotify is in fact where it’s gong).

Spotify is quite popular in Europe, but has some licensing issues to work out before it can work here in the U.S. Ek says there could be slight changes made to Spotify for an American release if that happens. They are working on the next generation of Spotify, and pre-install deals will likely be key for the service’s continued success. Ek says right now, you can go in and pick up a smartphone, it comes preinstalled with Spotify and you can get three to six months.

With the exception of the iPhone, most lack really good media players, says Ek. A lot of people use Spotify as a media player on Android/Nokia handsets, he says, and if you’re a BlackBerry user, you want it to work with that too. "We want to enable your library on all of these devices," says Ek. "We want to make music like water." 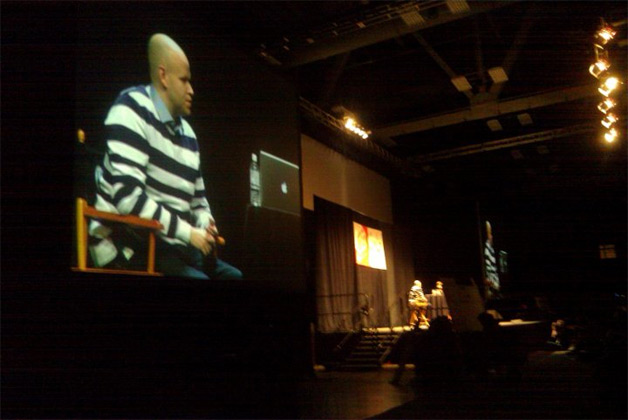 One of the more interesting parts of the keynote was when Van Buskirk took a question from someone on Twitter about Spotify’s advertising – something along the lines of if somebody listens to a lot of down-tempo music, will Spotify start filtering ads by mood?

He says they have targeting, and they continue to learn more about users, and more and more brands are discovering Spotify. "We’ve seen a lot of promising results with advertisers who have included artists," says Ek. He says click through rates have been 3, 4, and 5%. "If you look at traditional metrics, that’s super high."

As far as the question asked, Ek says, "that’s definitely something that we want to do."

You can figure out brand preferences, and if people are in the same demographic (like live in same place, listen to the same kind of music), they might get a different ad if they drive a BMW vs. an Audi, he says. He also says the ad model’s "getting better every month."

On another note, Ek thinks playlists are the new mixtape. With Spotify, among other services, they can be shared with others. Spotify users (of which there are seven million), he says, have a hundred million playlists, and about thirty percent of playlists are albums. "A lot of people say the album is dead," says Ek. "I disagree  – maybe pricing needs to be adjusted…"

All in all, the future of music delivery, according to Spotify, appears to be that users should be able to access their music libraries from virtually any device (through the cloud), share playlists with friends, and they can subscribe and/or get highly targeted advertising.

A lot of work remains to be done as far as making this all a universal reality, but in a nutshell (at least with Spotify), this seems to be the vision for what’s to come.

Young People In The U.K. Go Online For Advice