The Web is a vastly more social place now than it was a year ago, according to new data from Nielsen.  Double-digit growth occurred in a couple of categories, and at this point, Nielsen believes an impressive 22 percent of all time spent online is spent perusing social networks and/or blogs.

Actually, that figure may be even larger for June; Nielsen’s latest stats are from April (and so the year-to-year comparison was made with April 2009).  But in any event, a lot has changed, and Nielsen described the differences this afternoon with a paragraph full of percentages.

Nielsen reported, "[T]he world now spends over 110 billion minutes on social networks and blog sites. . . .  For the first time ever, social network or blog sites are visited by three quarters of global consumers who go online, after the numbers of people visiting these sites increased by 24% over last year.  The average visitor spends 66% more time on these sites than a year ago, almost 6 hours in April 2010 versus 3 hours, 31 minutes last year."

Then if you’re curious how social people are on a nation-to-nation basis, the chart below provides a little insight. 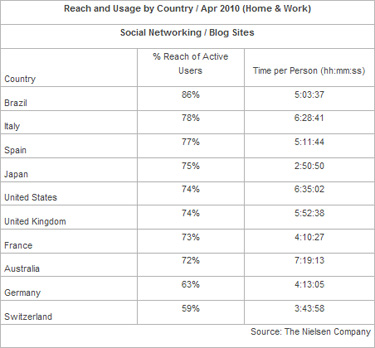 Consumers More Likely to Buy From Ads on Media Sites Than Social Media?